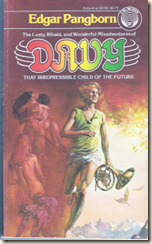 "I'm Davy, who was king for a time.  King of the Fools, and that takes wisdom."

So starts one of the great openings in science fiction, and one of its greatest novels.

Davy is about life in a post-apocalypse America, where an nuclear war and global warming* has devastated the landscape. The ocean has risen, and the United States has broke up into many small states, all dominated by the Holy Merican Church, a fundamentalist variation on Christianity.

Davy** is the son of a legal prostitute (allowed by the Church as a way to repopulate) who grows up in a church orphanage and is sent out as an indentured worker in a tavern.  He runs away and makes his way from his home in Skoar to adventures throughout the country of Moha and beyond.

There isn't a strong plot, but the book doesn't need it.  Davy goes from place to place, meets friends and lovers, and eventually marries Nickie, a woman who is everything -- smart, attractive, and very sexy.

The novel is written as Davy's journal of his life, with some notes and footnotes by friends and by the lovely Nickie. And the scene where the two meet is one of the most wonderful in all of science fiction.

The structure of the book seems disconnected -- just a series of adventures -- until you get to the end. I remember my first reaction to it was that, "Pangborn didn't cover what happened next."  Then I realized he had -- through asides and notes we learned all we needed to know of Davy's life from the end of the narrative until the present.

Another thing that I especially loved was the place names.  Pangborn lived in upstate New York and used a garbled version of actual place names. I live in the area, too, so it was fun to figure out what they were.  Some were easy:  Nuber (Newberg), Rensler (Rensselaer), Nuin (New England), Vairmont, Katskill.  I did need help to figure out Kanhar (Canajoharie) and some I haven't figured out yet.

The book has always been well regarded by those who read it. The fact that it's out of print is partly a condemnation of the changes in publishing over the years. The cover I used was for the edition I first read from 1982, and back then and before you could expect good science fiction books to go out of print but then reappear seven or so years later. Now they don't come back, and are forgotten.

Pangbourn wrote other well-regarded books. A Mirror for Observers won the International Fantasy Award*** in 1955, and some of his other books, including The Judgement of Eve, were set in the same world as Davy.  He also wrote some mysteries and other books, with an output of about eight novels and a couple of short story collections.

Every once in awhile, Davy comes back into print. If you ever see it, snatch it up.  You won't be disappointed.

*This is before the nuclear winter model was developed.

*** A short-lived attempt at a science fiction book award that was soon overshadowed by the Hugos.

Posted by Chuck Rothman at 8:24 PM