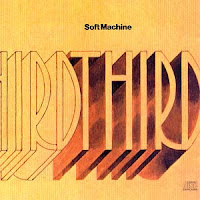 In 1970, the Village Voice named one album a milestone in music. What was it? Obviously, Soft Machine's Third (that is the title of this essay).

They were overstating a bit -- but not by much. The album is a classic of progressive rock and jazz/rock fusion (even though it predates the latter term).

Who was Soft Machine? Well, the group grew out of the Canterbury Scene in the UK. Canterbury, for some reason, became a hotbed of progressive rock music, with groups like Gong, Caravan, Hatfield and the North, National Health, Egg, Henry Cow, and many others -- none of which had any real success in the US. The Soft Machine -- named after a William Burroughs novel -- were arguably the foremost group coming out of Canterbury, and second only to the Pink Floyd* in the world of progressive rock.

The group was a freeform contingent, originally consisting of Daevid Allen, Kevin Ayers, Robert Wyatt, and Mike Ratledge. Ayers left, Allen was detained by immigration and not allowed in the country, and Hugh Hopper joined the other two on bass. Various other Canterbury musicians drifted in and out of the lineup (I saw one article that said, basically, that the best lineup of the group didn't stay together long enough to record anything).

I first became familiar with them with their second album, Volume Two. I picked it up at a friend's recommendation, and, the first time through, didn't like it much. But every once in awhile I would listen again, and it grew on me. I especially liked the way their lyrics (all written by Robert Wyatt) never rhymed.

So when Third came out, I was a fan and picked it up.

The credits are a bit misleading. The group at the time was Wyatt, Ratledge, Hopper, and generally Dean. The other names sat in the sessions and gigs that made up the album.

Now this is progressive rock. People today think that any song over five minutes is "indulgent" and too arty. But the great classical composers wrote for longer than that, and there's just no ironclad rule. Some long songs are great (the Pink Floyd* are best when they go eight minutes or more), and some are lousy. But they shouldn't be dismissed out of hand.

What the Soft Machine was doing was a melding of rock and jazz. There was a rock beat in the background, but jazz improvisations throughout. The music is truly thrilling. The songs run between 18 and 19 minutes each, and just flow around you like a great musical river. The album consists of four tracks: Hugh Hopper's "Facelift," Mike Ratledge's "Slightly All the Time" and "Out-Bloody-Rageous," and Wyatt's "Moon in June." It all grabs at your ears and draws you in. My favorite is "Moon in June," with its non-sequitur lyrics (non-rhyming, of course) and pastoral tune.

After the album, Wyatt left the group. They continued to perform, putting out albums Fourth, Fifth, Six, and Seven (the titles seem less like a lack of imagination than they do opus numbers), but without lyrics. Eventually Ratledge left, followed by Hopper, so the name carried on without any of the original members.

Wyatt had an strange but successful solo career. He first formed Matching Mole (a pun on the French name for Soft Machine: Machine Molé), then embarked on his own. While partying after the release of his first album, End of an Ear, he fell out an apartment window and was paralyzed. Though he couldn't play the drums any more, he persevered, and had a hit single with, of all things, the Monkees' "I'm a Believer." That led to a bit of controversy, as the BBC didn't want to show him performing the song in a wheelchair. After protests, they relented. Wyatt went on to record the well regarded Rock Bottom (said by some to reflect his feelings about his accident, but Wyatt has said most of it was written before it happened) and the delightfully titled Ruth is Stranger than Richard. He also became involved in politics.

The only other member of the group to have any impact was Elton Dean, who is well known for inspiring a young piano player to take his first name as his own.

The music is not for everyone, but if you think you'd want to give it a listen, it's the best bargain on iTunes. Since iTunes charges by the song, and there are only four songs on the album, you can get over 70 minutes of music for under four dollars. If you're into progressive songs, it's four dollars well spent.

*As they were often billed.

Not forgotten! Great album--I like your analysis. I reviewed it on my blog too.

I saw the original trio open for Hendrix and loved them. I loved the 1st 2 albums when they came out. I still prefer the psychedelic dada to fusion. I enjoyed Third, although especially the side that Robert sang on. I saw the Wyatt/Hopper/Dean/Ratledge lineup twice in 1970: Once at the Beacon Theater opening for Miles Davis, and once headlining at Victoria Hall in London. I admire the musicianship of the other 3 a great deal, but when Robert left, a lot of my interest left with him. I have followed his career though. The biography Different Every Time is sitting next to me patiently waiting for me to get to it.