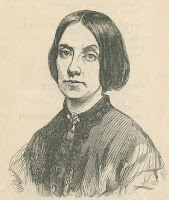 Who was the greatest American author of the 19th century? Well, these days, one might consider Mark Twain. There's also Nathaniel Hawthorne and Edgar Allen Poe was candidates, as well as Walt Whitman, Emily Dickinson, and Harriet Beecher Stowe (certainly the writer of the most influential book of the 19th century).

But if you asked the question back in 1870, there would be no debate. Both critics and readers would have agreed that the greatest US writer of the time was Mrs. E.D.E.N. Southworth.

Southworth was the master of the best selling novel of the time, the sentimental novel. She was born Emma Dorothy Eliza Nevitte, her father's dying wish giving her the two middle names. She was trained as a teacher until she married Frederick Southworth and went with him to raise a family.

Alas, Fred skipped town to seek his fortune in South America, leaving Mrs. Southworth and her two children to fend for themselves.* Mrs. Southworth went back into teaching and tried her hand at writing.

She was an enormous success. By 1857, she was earning over $10,000 a year from her writing, a pretty good sum even today from writing fiction, and even better back then.

I can't say if The Curse of Clifton is one of her best; it's just one I happened to read (I have another stashed away for a rainy day). What is most memorable to me was a scene that nowadays would be considered horribly contrived.

The situation: Archer Clifton, a soldier fighting the Indians, is returning to his old home to marry, bringing his comrade Frank Fairfax to be the best man. Frank meets Zuleime, the bride's younger sister, and sparks fly (quite proper sparks, of course; this was during the Victorian era). She wishes they could get married right away.

"Wait a minute," says Frank (I'm paraphrasing here). "It just so happens that I have an extra copy of Archer's marriage license here. I wasn't sure which name he and his bride wanted to use, so I had the clerk sign it and leave the names blank. All we have to do is fill in our names and we can be married. But we'll need a minister."

"Well," says Zuleime, pointing at a small cabin they happen to be passing, "it just so happens that that cabin is the home of an old minister whose lost his congregation. But he still has all the powers of a minister. Let's get married there."

So they get married. And about an hour later, news comes from the west: the Indians are attacking and Frank and Archer must return to their unit.

She is kicked out of the house, a fallen woman (she doesn't seem to have the marriage certificate with her, and I believe the minister died). So she has to take the most degrading of all work a woman can fall to.

She becomes an actress. On the stage!

I'm having some fun here, of course; these sort of things tell a lot about the assumptions of the audience in the 1850s (no sex without marriage, etc.). But, in a way, it's kind of charming.

And it is fun to read. Even the stuff that doesn't seem ridiculously dated is entertaining. Mrs. Southworth stuck to the conventions of her time (though her own marital history caused her to have a slight cynical eye when gazing upon "happily ever after"). But (once you get used to the 19th century prose), the books move along nicely, with plots and characters that make you understand why she was so popular.

Mrs. Southworth wrote over 60 novels all together, all forgotten now. Feminist scholars occasionally stumble upon her as an example for their theories, but no one is likely to read her work for fun. The sentimental novel died by the turn of the century; what it was lives on in romance novels. She died in 1899, still an important writer even then.

*This was not uncommon in the 19th century and isn't quite what it seems. With divorce unthinkable, many men just lit out for the frontier if they wanted out of a marriage, keeping the divorce rate low, but having the same effect on those they left behind.

Posted by Chuck Rothman at 6:18 PM

Hey, I just randomly came across this site...Actually in search of Southworth books. She may be gone, but not forgotten...She's one of the two "olden day" authors that I collect. The other one being Rosa Carey. I love the good old books...They just don't write them like they used to.

I found her books to be a lot of fun to read, and if they are dated, they are still entertaining.

Thanks for dropping by.

I came across your blog entry when I search Mrs. Southworth. I have started reading The Hidden Hand and have found it a very pleasing read and the characters are so interesting. I do have to keep a dictionary handy for all the words that are in that era of writing that I am not familiar with!

The "Hidden Hand" is perhaps one of Mrs. Southworth's biggest successes, but I advise anyone who starts it to be sure they have access to its sequel "Capitola's Peril" or they may develop severe personality problems. (I had to wait *years* to find out what happened!) Fortunately nowadays, both books are available online if you are desparate.

I also came across this blog post looking for another of Mrs. Southworth's books. (I'm almost at the end of Lilith and thought I'd better make sure I had another to start once Lilith is done.) I'm loving her books! I stumbled across her when I was doing some research on the history of my small rural Kentucky community and found a record of a young girl born in 1898 named Lilith. Where did that name come from? Possibly from Mrs. Southworth's two books about Lilith Wyvil Hereward. I didn't really need to read the books for my research but once I started, I found them really entertaining. I love 19th century fiction. I do find some of the "Negro" dialect a bit trying sometimes, but I have to admit I love Mrs. Southworth's sense of humor. Thanks for posting about her. It's good to find someone else who enjoys her too.

I found your blog when doing a search for Mrs. Southworth. Let me nicely correct you. She wrote over 120 novels, and she is most definitely not forgotten. I have collected her books for over 20 years now, and have acquired over 80 of them so far. I love the way she works her plots. She can leave you on a cliff hanger better than any of today's authors or TV in my opinion.
For those still looking, her books can be found in great number on ABE BOOKS' website - abe.com If you are looking for other authors from her time, check out Helen Papashivly's book - "All Those Scribbling Women". It is very interesting because it tells the who, why, & how many of these women got started writing in the first place.

I have just finished reading The Hidden Hand and Capitola's Peril.I didn't recognize the author and was surprised after starting the story and checking to find the publication dates. I was captivated by Capitola's progressive personality as well as the scenes with Old Hurricane. The chapters do paint vivid scenes and remind me of early movies from the 1920's and 30's. I have to wonder if there was some plagiarism by the writers for The Littlest Rebel, for the characters played by Temple (though a younger version of Capitola) and Barrymore.