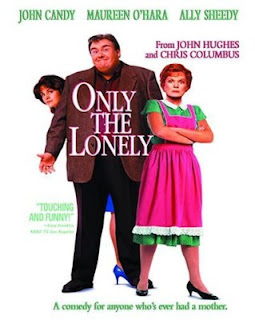 Chris Columbus had a talent for directing second-rate films that were big box office hits. He did Home Alone, Nine Months, and Mrs. Doubtfire --big at the box office, but pretty mediocre overall. Home Alone is dull and too sentimental (and I like sentiment) until the way-too-late payoff, while Mrs. Doubtfire stumbles from cliche to cliche on top of Robin Williams's mugging and is really only worth seeing as having the last cartoon footage directed by a true genius, Chuck Jones. (Columbus's two Harry Potter films were workmanlike, no more, and his Rent was good, so it looks like his real forte is directing films adapted from existing properties*.)

Oddly, though, Columbus was much more successful at moviemaking with his lesser known projects. His Adventures in Babysitting is a fine debut (I may talk about it some day), and his best overall is probably Only the Lonely.

It's not just his best film, but it's one of John Candy's best, too. Candy was famous as a wild man comedian from the great Second City TV, but his film roles rarely raised above caricature. This is one of his most touching roles, and it shows he had some chops as a dramatic actor.

It's a simple love story. Candy plays Danny Muldoon, a Chicago cop (well, pretty much in name only -- his job is driving a paddy wagon). He meets Theresa Luna (Ally Sheedy), who works in a funeral home (which is the basis of one of the funniest lines: Danny comes out of the home after Theresa has agreed to go out with him, and shouts you a happy "Yeah!" A group of people passing by give him a funny look. He says, "Oh... sorry... but I just got lucky in there with a girl." It does not make a good impression, and he continues on to make it all worse.)

There is only one problem: Danny's mother Rose (Maureen O'Hara). Rose is a great character, a firm believer in speaking her mind and letting the chips fall as they may. And she is a bit prejudiced against anyone who isn't Irish. Rose is a meddling mother, and Danny has to deal with his issues with her for his romance to succeed.

Maureen O'Hara is terrific as Rose. She had not appeared in a movie in 20 years, and this was her last actual film role.** O'Hara, best known for her roles in Miracle on 34th Street and The Quiet Man, manages to keep Rose from being a stereotype, and shows some wit that gives the role depth.
Candy is gently funny, but shows his dramatic chops, especially when he has to light into his mother for her "tell it like it is" persona. Anthony Quinn is also good as Nick Acropolis, a local man who has had his eye on Rose for some time, but who she couldn't accept because he wasn't Irish.
It's a film about letting go and growing up, and works just perfectly from start to finish.

*Oh, wait, scratch that. He did Bicentennial Man.

**She did appear in a few TV movies.
Posted by Chuck Rothman at 9:18 PM