Best of the West (TV)

It's hard to believe, but for many years, westerns were the mainstay of TV programming. At the height of the genre, there wasn't a night when one of the networks weren't showing something set in the old west. By the 70s, these petered out. Gunsmoke lasted forever, but the old westerns were slowly cancelled and new ones didn't take their places. Part of this was the idea that the genre had passed, but I think another issue was that audiences expected more realism in their dramas. You needed to shoot on location (take a look at Bonanza and note how nearly all the outdoor scenes are done on a sound stage), and it was hard to find locations that didn't have reminders of the 20th century.

But in 1981, ABC tried to buck the trend by putting on a satirical comedy, Best of the West.

The show was about Sam Best (Joel Higgins), who moves his to the town of Copper Creek, and is accidentally named sheriff. Copper Creek is run by Parker Tillman (Leonard Frey), who isn't happy to have someone like Best enforcing the law. Tillman's henchman, Frog (Tracey Walter) tries to help him best Best, but Frog is not really the sharpest guy in the room. 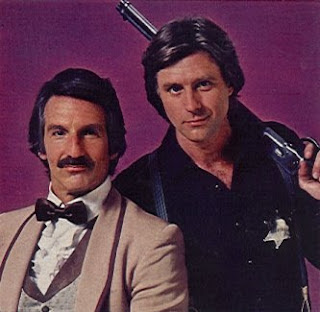 Best was a true believer in the western cliches, and his idealism is an annoyance to his wife Elvira (Carlene Watkins, later of Bob) and smart-mouthed son Daniel (Meeno Peluce). Elvira is a southern belle, and has trouble trying to adapt to living in a one-room cabin (though she tries, like when she tried to sweep up all the dirt, only to be told they had a dirt floor).

The real delight in the show is Frog, part of the tradition of peripheral characters who overshadow the stars. Walter plays the role in sort of a dazed, deer-in-the-headlights way and stands out in just about every scene he is in.

Frey is good as the bad-but-not-evil guy. His Tillman is a conniver, but his plans are often thwarted by Frog's ineptitude. However, he does carry enough of a threat to be a nice foil for Best.

Despite some big name guest stars (Dixie Carter, Andy Griffith, Christopher Lloyd, Richard Moll, Betty White), the show did poorly in the ratings, especially since it followed Mork and Mindy on Thursday nights (networks hate it when the show after a hit loses the lead-in audience), and was quickly canceled. The show might have done better if the satire were more biting, but you could see that the producers loved westerns and was willing to poke fun at them, but not attack them.

The actors went on to long careers on TV, though generally not as stars. Meeno Peluce made the well-regarded Voyagers! before getting lost in the transition from child star to adult star. Watkins, Higgins, and Frey did a lot of TV work, and Walter is a busy character actor to this day.

But the show was a pleasant comedy that should have done better.

I remember this fun series when it originally aired and I would love to see them again. Frog was great and I really loved Valri Bromfield as Laney Gibbs... she was a kind of mountain woman I think. This should be posted in its entirety on youtube or at least played on TV again. We need an obscure comedies TV network for shows like this.

Thank you for this. I was a fan of Carlene Watkins from when we were both at UT and she was in a lot of the drama productions. I wish I could have kept these shows on videotape, but we had our first VCR, and the tapes were way expensive compared to now, so we had to tape over things.