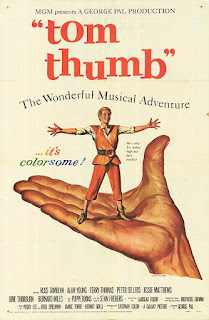 George Pal was one of the big names in science fiction in the 1950s. He produced and directed a series of big-budget films like The Great Rupert, Destination Moon, When Worlds Collide, and The War of the Worlds. In 1958, he decided to start directing and chose the fairy tale, tom thumb.

The lumberjack Jonathan (Bernard Miles) lives in the forest with his wife, Anne (Jessie Matthews). One day, he meets up with the Forest Queen (June Thorburn) who grants him wishes. The final wish is by Anne – who is childless – asking for a child, “even if he’s no bigger than my thumb.” And the next morning tom (Russ Temblyn) appears.

The movie does utilize some good effects to emphasize tom’s size, winning an Oscar for Best Special Effects. The movie also has songs, but nothing that really became memorable.

Russ Tamblyn is great as tom. He was an excellent acrobat, which allows him to do some impressive physical stunts. He also is peppy and upbeat in just the right degree to make the movie fun. 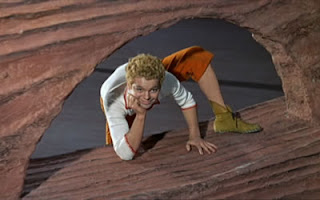 Peter Sellers had done some TV and UK movies, but this was his first US film. Terry-Thomas became a fixture in films for  years, usually playing a sill-ass Englishman.Of course, Alan Young is familiar as Wilbur Post in Mr. Ed, though before that he was well regarded as an up-and-coming Canadian comic actor.

Jessie Mathews is not well known these days, but she was a major stage star in the 20s and 30s in the UK. Her producers refused to let her film in the US and her career hit the doldrums after World War II as her character – usually a wealthy woman – did not fit into the times.  The movie was an attempt at a comeback as more serious actress.

The movie was  a major success, so big that MGM allowed Pal to chose his next project, which turned out to be The Time Machine.

I thought about this film recently when there was an Internet meme about naming the first movie you saw in a theater. My imperfect memory came up with Sleeping Beauty, but when I was searching around, I discovered tom thumb came out a year earlier.

**Another film I remembered from about that time – though I only saw the ads for it – was Plan 9 From Outer Space, mostly because I knew who Bela Lagosi was – and that he was dead – and thought that this was his last film.

Posted by Chuck Rothman at 2:31 PM