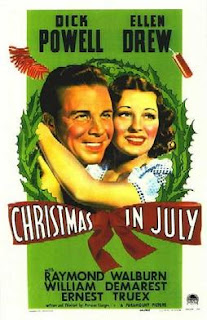 After the The Great McGinty was shot, writer-director Preston Sturges wasted no time  in shooting his second film. Less and a month after it wrapped, shooting began on his follow up, Christmas in July.

Jimmy Macdonald (Dick Powell) is an office worker who dreams of glory, entering every contest he can find so that he could use the winnings to marry his girlfriend, Betty Casey (Ellen Drew). His current dream is to win the Maxford House Coffee, with the slogan, If you can’t sleep at night, it’s not the coffee -- it’s the bunk.”

A group of coworkers prank him by sending a fake telegram telling him he’s the winner. and he goes off the Dr. Maxford (Raymond Walburn), owner of the coffee company, in order to collect the money. No winner had been announced, but Maxford assumed they forgot to notify him and, seeing the telegram, he writes the check and Jimmy goes off to spend it. But eventually, the truth comes out and Jimmy is in deep trouble..

As is usual for Sturges, it’s populated with idiosyncratic characters and frenetic situations. Powell by this time had the role of a charming romantic lead down pat.* and Ellen Drew is also quite good. The Sturges stock company showed up, most notably William Demarest as the head of the slogan judges.

And the twist at the end is one of the funniest in film.

The movie was another hit for Sturges, and two successes in only two months put in into the forefront of top directors.

Posted by Chuck Rothman at 7:12 PM