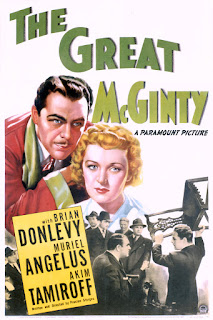 Last week, I wrote up a blog post on Easy Living, a movie with a script by Preston Sturges. But I realize that Sturges fits firmly in the category of Great but Forgotten. These days, you have to be a big film buff to know the name, but in his heyday he was one of the great comic minds of film,a man able to use both witty dialog and lowbrow slapstick as needed for a gag. But since he didn’t show his face, he gets overlooked. So I’ll be doing an overview of some of his films in the next few weeks, starting with the one that got him into the director’s chair:  The Great McGinty.

The film starts in a small bar in South America where Dan McGinty (Brian Donlevy) is the bartender and starts to tell his story to an American visitor.  McGinty was a tramp who took up an offer of $2 per vote to vote under a false name, and does it so well, that the political boss (Akim Tamiroff) starts rising in the machine, eventually being elected mayor as a reformer. He marries Catherine (Muriel Anglus) to prove his credentials as a family man and rises to become governor – before he falls.

The movie is a satire on old-fashioned machine politics of the era, but still holds up well  today.

Sturges had written the script and sent it to Paramount, who wanted to go forward. But Sturges had one condition:  he would sell the script to Paramount for $10, but only if he were allowed to direct the film. This was unheard of in Hollywood,* but Paramount agreed and Sturges ended up being the first to have a “Written and Directed by” credit.

Even better:  the movie was a hit. And Sturges won a best screenplay Oscar, making it the least expensive screenplay ever to win the award.

As for the cast, most were chosen because they were under contract and came cheap.   Brian Donlevy had been a dependable actor, though never really a star before this. His best-know role after this (in the UK,at least) was as the title character in The Quatermass Xperiment.

Akim Tamiroff’s accent meant he specialized in portraying foreigners. Probably his best-known role these days was Joe Grandi in Orson Welles’s Touch of Evil.  Muriel Angelus had a spotty career. This was her only lead role (and final film) but she is quite good as the woman who convinces McGinty to change his ways.

The film also introduced the actors who became part of Sturges “stock company,” who he used time and again in his movies.  Most prominent was William Demarest, who appeared in eight of Sturges’s films, plus two others he wrote.

A great beginning to a fine directorial career.