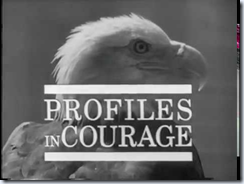 By 1964, anthology series were slowly dying out, but that didn’t keep people from trying. And given the popularity of John F. Kennedy after his death, it seemed a natural to dramatize his Pulitzer Prize winning history, Profiles in Courage.*

The show dramatized the events in the book, but since there were only eight originally, other politicians were added. Various well-known actors (both at the time and subsequently) were cast, including Brian Keith, Walter Matthau, David McCallum, Wendy Hiller, Peter Lawford, Burgess Meredith, Bradford Dillman, Caroll O’Connor, Whit Bissell, and many more.

Each episode dramatized a politician who made an unpopular decision because it was the right thing to do, even though it risked their career.

I ate it up.  I was already interested in politics and had read the book and the idea of seeing it on the small screen got me hooked.  The stories were well written and well chosen and the show ended up winning a Peabody Award.

Alas, not everyone was as much into history as I was as a kid and the ratings weren’t there.  The show only ran one season before being canceled.

However, these days, things like this aren’t lost. A few episodes can be found on Youtube and Archive.org.  Give it a look.

Thanks to Joseph Harder for the suggestion (a very long time ago).

*I’m not going to go into the authorship controversy.

Posted by Chuck Rothman at 5:30 PM

Thank you so much for finally remembering my suggestions from any years ago. I will repost this on my FB group, :The Best Of Everything: A Banquet To Which Everybody Is Invited.