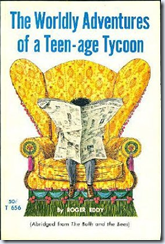 Posted by Chuck Rothman at 3:47 PM

Bought this book at our Elementary Shools Book Fair about 1960 or 61, loved it !