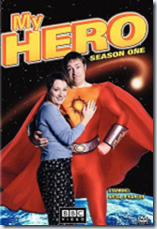 (2000-2006)
Created by Paul Mendelson
Starring Ardal O’Hanlon, Emily Joyce, Geraldine McNulty, Hugh Dennis, Lill Roughley, Philip Whitchurch, Lou Hirsch
IMDB Entry
Superhero TV shows usually concentrated on the acts of heroism and derring-do. But My Hero did a different take, using another common sitcom trope: the fish-out-of-water comedy.
It features the life of Thermoman (Ardal O’Hanlon), a superhero from the planet Ultron, but mostly his civilian life as George Sunday.  George runs a health food shop and develops a crush on Janet Dawkins (Emily Joyce)  after rescuing her from falling in the Grand Canyon. Janet is a nurse, working with Dr. Piers Crispin (Hugh Dennis), a raging egomaniac, and Mrs. Raven (Geraldine McNulty), who has the disposition of Attila the Hun. Arnie (Lou Hirsch) is a friend of George from Ultron who tries to guide him about human ways and Tyler (Philip Whitchurch) is an aging hippy who knows George’s identity, but is constantly spouting nonsense, so no one believes him.
George is still confused about Earth habits and expressions. It’s an old gag about the foreigner who takes everything literally,* but the show was endlessly inventive in keeping it fresh, mostly because George is smart enough to realize it pretty quickly when it happens. O’Hanlon is just perfect in the role – confused, but also very charming.  Emily Joyce is impressive as the calm center of the action, the straight woman to the madness around her.**  Geraldine McNulty is terrific as the woman who has a nasty word for everyone.
The show makes the most of the talents of the actors involved, and the writing is top-notch. In many ways, this was My Favorite Martian in England, but the main difference is that the show dealt with more human issues instead of just gimmicks.
My Hero ran 51 episodes over six years. The final year, they tried to pull a Doctor Who and replace O’Hanlon with another actor, but the show died off after that.
_______________________________________________
*I can think of examples of it from The Three Stooges.
**One nice thing is that they don’t drag out the revelation that George is Thermoman – Janet finds out 2/3rds of the way into the first episode.
Posted by Chuck Rothman at 10:53 AM

I loved this show. Our local PBS station used to show it during their weekly Britcom block, but they ran only the first two seasons. I still can't get the DVDs from Netflix.

I LOVE that show! My favorite episode is the funeral one, where George keeps "dying" and they end up having to have a funeral for him. Mrs. Raven is the best character, imo. And I do love me some Tyler <3 I wish they'd release the season beyond season 2 on DVD in North America.