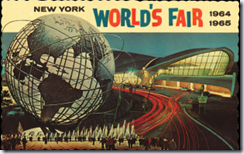 I was turning twelve when the 1964 New York World’s Fair came to Flushing. It was a couple of hours away from where I lived and its combination of spectacle and education. I loved it.

The fair was an attempt to repeat the success of the 1939 New York World’s Fair, but it ran into a snag. The Bureau of International Expositions (BIE) had rules as to what could be termed a “World’s Fair,” and the New York one broke several of them, so the fair was not officially sanctioned, and its members were told not to take part. But New York went ahead anyway, and used exhibits from corporations and from countries that were not BIE members.

Back then, I didn’t pay much attention to the politics (though I did know it wasn’t official).  It was a World’s Fair as far as I was concerned, and I loved it.

Twelve wasn’t considered too young to be on your own, so several times I wandered the grounds on my own.

Some of the things that still stay in my mind. 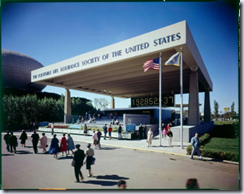 I probably went five or six times; toward the end, the novelty had worn off. My mother, who had been to the New York World’s Fair in 1939 said that this was nowhere near as good, but I thought it was great.

Of course, it came to and end.  Most of the pavilions were taken down (I had thought that was a waste, though it seems none were built to last more than a few years, anyway). The two that remained were New York and the Unisphere, the symbol of the Fair.

Still, it gave me many happy memories.

Posted by Chuck Rothman at 5:55 PM

Ken Kesey's acid road trip had this fair as destination.

Here's some facinating info on the cars used on Ford's Magic Skyway--
http://www.aacamuseum.org/15688-2/

Saw a documentary with Walt Disney and his imagineers. They were creating animatronic dinosaurs for this 1965 N.Y.World's Fair.

I was impressed at how good the technology was for the dinos considering it is now over 50 years old. Since '65 Disney,Jim Henson's Creature Shop,and other special FX houses have come light years in the development of animatronic technology.

Always thought that a science fiction film or TV show should take advantage of the stunning architecture at World's Fairs or Expos in order to film location scenes.

The Disney sci~fi TV movie/pilot "Earth Star Voyager"did just that when they shot a portion of the movie at a Canadian Expo outside & inside some of the amazing looking buildings.

Battlestar Galactica(1978)also did a similar thing for one of their episodes.It involved the character of Starbuck going into an abandoned city.
It was a WF or Expo where they shot Starbuck wandering,but i'm unsure exactly which one it was & where it was.

In both cases the filming at such locales enhanced the scope and atmosphere of the production.Gave them a movie sized feel.