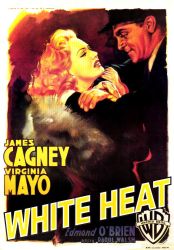 The gangster film was an relic of the 30s.  Usually produced by Warner Brothers, and often starring some combination of James Cagney, Humphrey Bogart, Edward G. Robinson or George Raft, the genre gave such great films as The Public Enemy, Little Caesar, Scarface, and The Roaring Twenties.  One of the last of the genre – which focused on the rise and fall of a bad guy – was White Heat.

Cody Jarrett (James Cagney) is a sociopath, long before the word was common.  The movie starts out with the robbery of a mail train, where Jarrett cold-bloodedly murders the crew – and one of his gang.   He holes up with his wife Verna (Virginia Mayo) and his mother (Margaret Wycherly), but when the police find them out, he confesses to a lesser crime that he says he committed at the time of the robbery and is given a short sentence.  Unconvinced he really is innocent, the police put an informant (Edmone O’Brien) in prison to gain Cody’s confidence to put him away, as well as capture some of his associates.

Cagney is electric as Cody.  He’s a character with no morals at all, and also one who is completely unpredictable.  What’s even more interesting – and quite creepy – is his fixation on his mother.  She supports him in all his endeavors, treating him as her little boy.  And Cagney’s scene when he discovers his mother is dead is one of the most emotionally raw in film of the time.

Wycherly’s mom is also memorable, a woman nearly as psychotic as her son. The movie is also known for its finale, when Cody finally gets to the top of the world.