The Fatal Glass of Beer 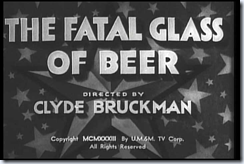 I happen to like subtle humor – jokes that require you to think a moment to figure out.  Usually, that also overlaps with deadpan humor – jokes that are treated seriously by the characters involved.  I may be a minority in that view, but I think that even if you’re not, it’s worth watching the genius of The Fatal Glass of Beer, one of the funniest 20 minutes ever put on film.

W. C. Fields made five short subjects.  We all know him as a cultural icon, and Fields was one of the best and most wide ranging of the great comedians.  While he usually came from the same comic place, his characters were on a continuum, from those who were the curmudgeon we expect him to be, to others who accept life’s insults with little more than a quiet comment.

The Fatal Glass of Beer is not what people typically think of Fields, and may not seem like much the first time around,* but the more you see it, the funnier it is.

The film opens in the Great White North, where Mr. Snavely (Fields) is in an isolated cabin while the wind blows wildly.  Constable Posthlewhistle of the Mounties drops in, and asks Fields about his son, Chester (George Chandler), who is about to be released from prison.  After singing a tuneless song outlining Chester’s fall – due to drink -- Fields returns to his wife (Rosemary Theby) to be there when Chester  returns.

The movie is a deadpan parody of adventures set in the Yukon. The acting is deliberately broad; Fields and everyone else declaim their lines like in an old time temperance melodrama.  The outdoor scenes are shot against a process screen and make no attempt to make it look like anything other than a process screen.  The plot is melodramatic in the extreme and the blowing snow is clearly cornflakes.

And that’s the whole point.  The movie is filled with subtly funny moments that you may not notice the first time, but the more you see them, the more delightful they become.  It’s made to be deliberately bad, which is part of the reason why it’s so great. 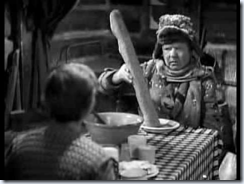 There are also some wonderful sight gags, great and memorable lines** that get added humor from the delivery.  The humor is often as subtle as the acting is broad and it’s one of the few comedies that gets funnier the more you see it.

A lesser comedian would have said “How can I fit that under my hat?”  “Or that’ll hurt my head.”  Fields has the genius to assume that the audience would know what the joke would be, and went beyond the obvious.

Fields made four other short films:  The Gold Specialist***, The Barber Shop, the Pharmacist, and The Dentist.  All are good, but The Fatal Glass of Beer is the finest.

***And adaptation of his vaudeville act.

Posted by Chuck Rothman at 3:36 PM

The choice of the name "Chester" for his son is deliberate. When Fields was doing his Lucky Strike (Cigarettes) Radio Show, he would often talk about his "son," CHESTER FIELDS. It took over a year before the Lucky Strike folks caught on, and Fields nearly got fired...