Alive and Well in Argentina (music) 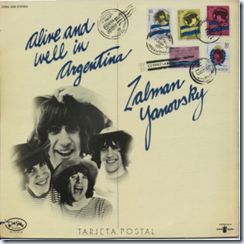 Pop music success is like hitting the lottery:  the odds are against you, and once you hit the jackpot, it’s not likely to happen again.  Zal Yanovsky was a member of one of the great music acts of the 60s, but when that ended, he was forced to set out on his own. The result was Alive and Well in Argentina.

Yanovsky was born in Canada and started to be part of the folk scene in New York in the early 60s.  His first brush with fame was when he joined with other folkies of the time – Cass Eliott, Denny Doherty, John Sebastian, and James Hendricks* – to form the Mugwumps, a group that was legendary even without recording anything.  When they broke up, Denny and Cass became half of the Mamas and the Papas, where Sebastian and Zal formed the Spoonful.**

The Lovin’ Spoonful was one of the great acts of the mid-60s, putting out pop hit after pop hit, most written by Sebastian.  Not only were the successful, but they were critically praised.  I remember several interviews with top musicians of the time who said they never listed to top 40 radio – except for the Lovin’ Spoonful.

John Sebastian wrote nearly all their hit songs, but Zal was the most telegenic.  He was tall, wore cowboy hats and fringed jackets, and stood out whenever they were on TV.***  His ebullient personality made him a fan favorite.

Then it fell apart:  Zal was arrested for marijuana possession in 1967.

Now by that time, the charge didn’t hurt a rock musician’s career.  But Zal did the unthinkable:  under pressure from the police, and afraid he’d be deported back to Canada (or, at least, not allowed to return to the US if he ever went home), he named his supplier.

That was a betrayal. Fans were outraged, and it created tension in the group.  Zal left soon after.

In 1968, he released his solo album Alive and Well in Argentina. Even though he didn’t write much with the Lovin’ Spoonful, it had a similar sound – just goofier.

The songs were mostly cover versions of older songs, with a few originals.  Zal worked hard to make them fun to listen to.  “Little Bitty Prettey One” was a remake of a hit in from 1957, with a falsetto chorus and some nice harmonies.  “You Talk Too Much” was the same thing, and performed so that it was a humorous as possible.

The title tune was one of the few songs Yanovsky wrote by himself, a silly song about him ending up in South America, playing with the belief that Nazis moved down there after the war.  It has the sound of a wild party, and is, perhaps, commenting on Yanovsky exile from the rock scene.

The album didn’t crack the top 100, since it was probably too strange for mass appeal.  Zal also released a single, “As Long as You’re Here,” which was not on the original album, but was included on later versions.  It didn’t do wall.

After that, Zal disappeared from music.  He would occasionally show up unannounced at a John Sebastian concert, playing with his old friend, and had small gigs here and there, but spent his time running the Chez Piggy restaurant in Kingston, Ontario. He died in 2002.

***Sebastian often played the autoharp on TV, which just looked strange for a rock ban.

Posted by Chuck Rothman at 9:58 PM

Excellent! I love the Lovin' Spoonful but had no idea this album existed. Thanks for bringing attention this Zal's forgotten music. Now to see if I can find it...

It's easy to find, but not with coveted the smeary purple cover.