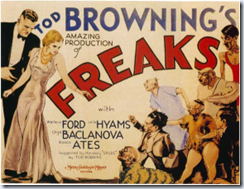 It’s always fun to see how attitudes have changed over the years.  When it came out, Freaks was considered so horrifying that they cut almost a half hour out of it.  Nowadays, I doubt anyone would be particularly frightened, but it has a strong message of accepting people as human beings.

Director Tod Browning had been making silent films for years, and was riding high at the time after his Dracula was a sensation.  In this case he adapted a short story and, drawing on his experience in a circus, filmed a movie about the sideshow performers – the “Freaks” of the title.

The story is set in the circus, where the midget Hans (Henry Victor) has a crush on the trapeze artist, Cleopatra (Olga Baclanova).  It’s clear from the start that Cleopatra only pays attention to Hans because he has money, and when she discovers he is heir to a large inheritance, plots with her lover Hercules (Henry Victor) to marry Hans.  But it all fallse apart at the wedding dinner, leading to retaliation.

Most of the film, however, is not so much plot driven, as it is a slice of life in the circus.  Browning cast real circus performers, and they are certainly strange in appearance, but they are portrayed as no different from anyone else.  The sideshow performers are a family and the film is very much from their point of view.  We see the cruelty to them at every turn, but, at the same time, get a glimpse into their lives.  Much of it is mundane in a slightly skewed way:  the bearded lady has a baby; her husband, the human skeleton, hands out cigars.  The performers work in their specialties, but in a matter-of-fact ways that make things like the armless woman drinking a glass of beer seem like everyday events of no particular note.  The two leads, Phroso (Wallace Ford) and Venus (Leila Hyams) treat the others as equals, indicating that the audience should, too. 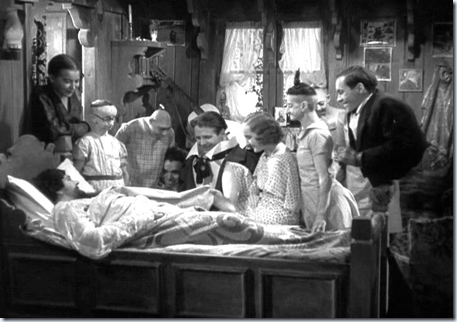 The wedding feast sequence is duly famous, as the group celebrates the marriage and begin to discover what a horrible human being Cleopatra is.  It all a joke to her, until the others begin to chant “Gooble Gobble, We accept her. One of Us, One of Us” and her repulsion comes to the fore.

The horror sequence comes at the end, as the performers take on a sinister air as they target Cleopatra and Hercules in a thunderstorm, lurking under circus wagons and in the shadows.  It’s moody piece that still holds up well, but, unfortunately, the final revelation of horror looks pretty damn silly to modern eyes.  The original cut may have been more scary.**

When the film came out, though, it was a sensation – in a bad way.  People were repulsed by the characters, and the film did terrible business.  It was banned in the UK for 30 years, and the reception pretty much put an end to Tod Browning’s career.

It wasn’t until years later that the movie was rescued from obscurity and took its place in the pantheon of horror films.  It may not be scary nowadays, but it’s a terrific movie.