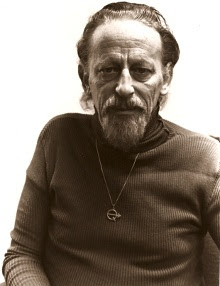 As I may have mentioned before, when I first started reading science fiction, the short story was king.  Authors could make a living writing them* and readers were happy with anthologies and single-author collections.

And one of the kings of the short story was Theodore Sturgeon.  While his name is well known to SF writers, and his stories remain in print in small presses, you’d be hard pressed to find him in mass market works.

Sturgeon was born as Edward Hamilton Waldo, but had his name legally changed to when his mother remarried when he was 11.  He started writing in 1938, and soon established himself as a master storyteller, writing science fiction, fantasy, and horror with equal facility.

Sturgeon is best known today for Sturgeon’s Law:  90% of everything is crap.  But very little of his output fits in that category.  He had a fantastic and free imagination and a way of creating vivid  and quirky characters.

The cliché is that he wrote about love, and that’s true in many ways, but he was not writing romance.  He was interested in it in all variations.  “The World Well Lost” from 1953 is one of the earliest stories to treat homosexuality sympathetically.  “If All Men Were Brothers, Would You Let Your Sister Marry One,” in the original Dangerous Visions makes a case for a form of sexuality that is still taboo today.** “When You Care, When You Love” shows to what extent someone will go to help someone they love.  “Not an Affair” is about a seduction for a purpose.  The latter two stories have ending twists that make them unforgettable.  “A Saucer of Lonliness” – made into an episode of The New Twilight Zone is a charming love story.

But Sturgeon was no softy.  His short story “It,”*** written in 1940, is one of the best horror stories ever written, because the monster in it is not evil and thus predictable, but amoral and capable of anything at all.  “Killdozer” – later made into a TV movie – is a straight adventure story.  “Mr. Costello, Hero” is a scathing denunciation of McCarthyism; the final image condemns all people who take power by playing on fear.

In a different vein, there were dramatic stories like “The Man who Lost the Sea” (again with a powerful ending) and “Slow Sculpture.”

As for humor, Sturgeon actually had a story in The National Lampoon and while “Pruzy’s Pot” may not be his best work, it’s certainly a great idea for a humor story that fit right in with the Lampoon’s sensibility.  “Two Percent Inspiration” is a fun story, with a great triple twist at the end.

Sturgeon’s best known works were for TV.  He wrote two Star Trek episodes, both memorable.  “Shore Leave” has people enjoying themselves on what turns out to be an amusement park planet.  His other, “Amok  Time,” wrote the bible for Vulcan sexuality.

As far as novels are concerned, his More than Human is considered a classic, telling the story of the evolution of a gestalt human being, the next step in evolution.****  But his other novels were few and far between.  He ended up writing only six under his own name, plus some novelizations.  One of these is my favorite.  His book The Player on the Other Side is sometimes cited as Ellery Queen’s best novel, but Sturgeon wrote it under Queen’s direction.

Sturgeon didn’t really need to write novels, though.  His stories were sold and constantly anthologized, bringing in a regular income.  He also had dozens of collections, more than just about any other author this side of Asimov.*****

The list of memorable Sturgeon stories is long, though he won very few awards – only the International Fantasy Award, and a Hugo and Nebula for “Slow Sculpture.”  Much of this was timing; a lot of his best work was written before the awards were set up.

Sturgeon died in 1985.  His last novel, Godbody, was published the next year but because SF readers prefer novels (and long ones) to anthologies, it’s hard to stumble upon his work.  A ten-volume edition of his complete stories is available, but it’s not likely something you’ll see in your local bookstore.

But his contribution to the genre is immense.  There’s even a Theodore Sturgeon Award for best SF short story given each year, though it’s relatively unknown.  Sturgeon’s personal motto:  “Ask the next question” (represented by a Q with an arrow through it) is also well known in SF circles.

Seek out his stories.  No one was better at firing the imagination.

**And will probably remain so.  But Sturgeon raises questions about our assumptions.

***I’m certain that Stephen King knew of it when he reused the title.  The monster in the story was the precursor of other plant-based monsters like The Heap, Man Thing, and Swamp Thing.

****Like many SF novels of the time, it’s a fix-up of three shorter works.  This allowed him to sell the book twice – to the magazine that published the original.

*****Including one titled Caviar, probably the cleverest title for a science fiction collection ever.  Think about it.

I read Sturgeon early on. He was a master, particularly of the short story. "Killdozer" was partly based on the time he worked as a bulldozer driver.

I stumbled across "Godbody" at the library. The Introduction has a good short biography - things you really need to know about this remarkable man.

It is, however, obvious why "Godbody" never made the major market - even though the writing borders on the phenomenal.

The story is told from the viewpoints of several people; the introduction points out that you can open it up to a page at random and know exactly who's speaking.

He made up the Vulcan salute and "Live long and prosper" as minor window dressing for his story. You can't get through a day without hearing that now.