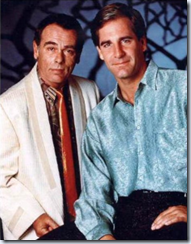 Quantum Leap was like no other science fiction show.

The concept behind it is complicated.  Scientist Sam Beckett (Scott Bakula) is accidentally sent back in time, trading places with someone from the past.  And that was meant literally:  he would look to everyone but the audience just like the person he replaced as he would try to fix something that had gone wrong.  If he failed to make the change, he’d be stuck as the other person forever.  He was assisted by Al (Dean Stockwell), a holographic image of a man from his own time who only Sam could see.  Things were complicated by the fact that the leaps “Swiss-cheesed” his brain, so that there were gaps in his knowledge.

Creator Donald P. Bellisario had had a big hit with Magnum PI, and wanted originally to do an anthology show. But he knew the business well enough to to understand no network would ever agree to one.  That’s where he came up with the idea, allowing there to be the same lead character in every episode, while being able to tell stories of all different times and places.

The show started out with some strict ground rules.*  Sam could only travel within his own lifetime.  No one but Sam could see or hear Al.  And the story would not have him leaping into famous people or anyone near them (though he did have encounters with them, something Bellisario called a “Kiss with History”).

What made the show live up to the concept was the writing. Bellisario wrote many of the scripts, including most of the best.  His wife, Deborah Platt, also contributed quite a bit, and it’s a toss up to figure out who was better.  Tommy Thompson also contributed many good ones.

As for the acting, the two leads were terrific.  Bakula played Beckett with a basic decency and wonder about what was going on around him.** Dean Stockwell’s Al was a comic relief and a big ladies man whose personality completely obliterated the fact that his main role was to dump information about what was going on to both Sam and the audience.***

Some of the most memorable episodes were:

The show was never a ratings smash, but did well enough to continue for five seasons.*****  It had a rabid cult following (who probably are upset I’m calling it “forgotten”), but the general public never warmed to it, and there’s been no revival of it. DVDs are out, and the entire series is available on Hulu (the first two seasons for free), but since it’s so hard to explain the concept, it’s also hard to get people to watch.

If you’ve seen it, you’ll agree it was a great show.  If you haven’t, you’re in for a real treat.

**His “Oh, Boy,” which he often said when he showed up in a new situation (and it always was an awkward one), was the show’s catchphrase, so much so that when Superman of the time traveled in a story during the show’s run, he used it, too.

***This sort of info dump is the bane of bad science fiction, but it works here because Al is such an interesting character and because Sam doesn’t know the information.

****Which leads to one of the most powerful exchanges in the show:  Sam is bemoaning the fact that they won’t listen.

*****It helped that the director of programming liked it.

Dunno if I'd call the series 'great', but it certainly had some decent moments. Problems I had with it were hokey science and some cliched tropes.

Plus, I'd like to point out that it's generally considered a 'chick show' by a lot of fangirls.