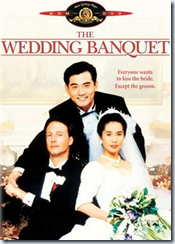 When one thinks of foreign language films, you don’t think of many films set in New York City where the main language is mandarin Chinese. The Wedding Banquet is an early film by director Ang Lee, in set in Manhattan and featuring a dilemma that shows how much social patterns have changed.

It’s a film about a very happy gay couple, Wai-Tung Gao (Winston Chang) and Simon (Mitchel Lichtenstein).  Wai-Tung is in his late 20s, and his parents are beginning to get more and more insistent he get married.  Naturally,* he can’t tell them the truth, and concocts excuses.  But the excuses run out and Wai-Tung is forced to act:  he finds a penniless girl from Taiwan, Wei-Wei (May Chin), who needs a green card, so he asks her to marry them.  His mother and father (Ya-lei Kuei and Sihung Lung) are overjoyed and fly to New York to be there.  But they are shamed by the sparse marriage at City Hall, and, when an old friend meets them, they arrange for an expensive wedding banquet to celebrate their union.

The result is a charming combination of comedy and drama, with revelations (obviously), mistaken identity and secrets, leading to an ending that resolves things delightfully.  The characters are charming and well drawn.

The movie put Ang Lee on the map.  It got an Oscar nomination (but didn’t win), but that didn’t matter.  His next film, Eat Drink Man Woman** was a bigger hit and, and his version of Sense and Sensibility also showed his ability,  He returned to Chinese language films with the smash Crouching Tiger, Hidden Dragon.  A few years later, he won a directing Oscar for Brokeback Mountain.

Lee is now considered a top film director.  And while he has continued making films showing a great sensitivity to character, The Wedding Banquet shows that he was fine talent from the beginning.

*A movie you should never see on an empty stomach; you’ll leave the theater starving.  It was remade a few years later as Tortilla Soup.

Posted by Chuck Rothman at 9:20 PM