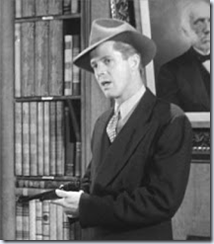 Hollywood was always about typecasting. This was especially true under the studio system, where an actor could develop a type and keep working for years.  Dan Duryea knew his part, and became one of the more entertaining heavies in film.

Duryea grew up in White Plains, NY and tried his hand on Broadway. He got his first break in in 1934 with a small role in Dead End, which got larger as the play continued to run. That led him to several more plays, until he was cast as Leo in the original run of The Little Foxes.  When the play became a film, he reprised the role, and moved to Hollywood to try his luck.

Duryea realized quite early on that he was not leading man material.  There always was a superior smirk in his smile, and sarcasm in his words. So he made the decision to make good use of these and become a bad buy.  He usually played a bully and a coward, someone who would threaten you just for the fun of it, and vicious enough to carry through.  But if he was defeated, he’d be whimpering at the unfairness of how he was being treated.

After The Little Foxes, he appeared in Ball of Fire, cementing his reputation and a sleezy character as a comic villain. He cracked jokes but also made a sinister presence as he did so.  Later, he went into full-fledged villain, the type of guy who would threaten the hero or heroine while smirking all the time as their discomfort.

Other appearances during this time in the Scarlet Street, which he convinces his ex-girlfriend to swindle the mild-mannered Edward G. Robinson.*

Even when he doesn’t play and out-and-out villain, he’s a deliciously unlikeable character.  In The Great Flamarion, he’s the husband of Mary Beth Hughes, and, while not actively bad, he’s unpleasant enough so that you understand her desire to get rid of him

Duryea’s career devolved into B pictures by the 1950s, but TV came around to keep his career going.  He even starred in a syndicated show, China Smith, though I can’t imagine him as a hero.  His final major role was in the first prime time network soap opera, Peyton Place.

Posted by Chuck Rothman at 4:48 PM

Ride Clear of Diablo (1954) --- The best Duryea ever, in my opinion. He plays the sympathetic outlaw to Audie Murphy's Deputy Sheriff.

The Cliff Grundy Story (Wagon Train TV Show, Season One) --- Duryea as a good guy and one of Flint's friends. He's fabulous!