You can have your 24, your men and women from U.N.C.L.E., your impossible mission force, Control, Avengers, your secret agent men, your burn notices, hell, even your James Bond.  The best spy show ever to appear on TV was The Sandbaggers.

The Sandbaggers had no fancy spy technology. There were no evil supervillains.  No climbing up the side of buildings.  Only one explosion in the entire series (in the first episode).  The fate of the world was never in the balance, and the missions were often botched.  The main character didn't drink, and if there were treacherous female spies, you could bet that they wouldn't want to sleep with you.  You had to worry about budgets, finding replacement spies, and government approval.  Most of the scenes took place in small offices as people argued how to handle a situation.

Yet all this was far more exciting than any other attempts to portray the spy business on TV.

It was a creation of Ian Mackintosh, a lifelong naval officer who developed a talent for writing. There is some evidence that he was actually involved in spying, and he set out to write a realistic look at how things are actually done in the real world.

The show focuses on Neil Burnside (Roy Marsden), Director of Operations of the UK Special Intelligence Service, and especially their Special Operations Section, known as "Sandbaggers.*"  Burnside is shorthanded; there are never more than three Sandbaggers, and often less due to them being killed while on a mission.  And though there are plenty of sensitive secret missions, Burnside is forced to spend most of his time dealing with political issues from his own government, in the form of the director of SIS, C (Richard Vernon); the deputy director, Matthew Peele (Jerome Willis), who mistrusts Burnside deeply; and the Permanent Undersecretary of State (and Burnside's ex-father-in-law), Sir Geoffrey Willingham (Alan McNaughtan).

This may sound dull, but it's far from it.  Burnside tries to run his department free of interference, and to keep his agents from going on missions where the risks outweigh the rewards, but it often isn't possible.  Things screw up, and sometimes Sandbaggers die.  The threat isn't the end of the world as in most spy shows, but rather a threat to the British government and to Burnside's job.

Burnside sometimes has to do things he doesn't want, and that is what makes the show so fascinating.  In most spy films, you know the good guys will win at the end.  In The Sandbaggers, you don't. Often they win.  Sometimes they don't -- with disastrous consequences.  And you can never be sure.  Here, Burnside lays out the principles of what makes for a successful spy mission.

Burnside is helped by Sandbagger #1, Willy Caine (Ray Lonnen), who has a great distaste for adventure and guns.  He also relies on Jeff Ross (Bob Sherman), the head of the CIA in London, who he shares information with and who can bring in help when needed.  The office is run by Diane Lawyer (Elizabeth Bennett), who has a dry sense of humor about the goings on.

What makes the show great are four elements:

The result is great TV.  I would even say that the season one finale, "Special Relationship," is the most tense single episode of any show ever on TV. 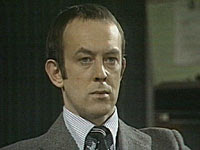 But the biggest part of the show is Burnside.  He's smart, obsessed with his work, passionate about protecting his department, and willing to do anything -- no matter how much of a dirty trick -- to get the mission completed.  It gets him in trouble all the time, and Roy Marsden is absolutely unforgettable in the role.  Always wearing three-piece suits like armor, he portrays a man who is completely dedicated, and is ruthless in getting what he wants, even when that blows

The show ran for three seasons in the UK.  It would have run more, but, in the middle of season three, Mackintosh disappeared.  In what sounds like a Sandbagger episode, his small plane vanished over the ocean.  He had left behind four scripts, including the finale, and others added more to finish the season, but the producers felt that, without him, there was no point in continuing.  The show was canceled.

The episodes showed up on in the US on scattered PBS stations in the 80s, but it never received the popularity and acclaim it deserved.  Those who saw it knew it was something special, but too many people never had the chance.

It's out on DVD.  Get it and prepare for greatness.

**Mackintosh clearly knew much about how the spy service works in the UK.  In fact, every episode had to be given security clearance and one was never filmed because it infringed on the Official Secrets Act.

**Though nowadays you can't help noticing that things would have been much better with cell phones.

I can neither confirm or deny that bootleg VHS tapes of The Sandbaggers were VERY popular within the Directorate of Operations.
Agree that the show is the standard for realism. Will accept arguments for Tinker, Tailor, Soldier, Spy.

Oh ya, the phrase "sandbagger" refers to one who uses a sandbag (sap, blackjack) to quietly remove a 'problem.'
You may find references to the manufacture and use of sandbags by Royal Navy personnel in the novels of O'Brian and C.S. Forester. Sandbags were preferred to cutlasses, pistols and even belaying pins because they were silent.