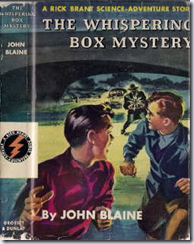 There were many series of "boys books" (as YA novels were called back then) as people tried to find the next Hardy Boys or Tom Swift.  I was a fan of both, first starting with Tom Swift, Jr. and moving on to Frank and Joe Hardy.  I read extensively in them, but my favorite book of this genre was in neither series.  It was a book I inherited from my cousin, who outgrew it: The Whispering Box Mystery, featuring Rick Brant.

The Rick Brant series leaned toward a hard science version of Tom Swift, Jr., with elements of the Hardy Boys.  Rick Brant was the son of scientist Hartson Brant, who ran his own personal research facility on Spindrift Island, just off the New Jersey coast.  Brant went off on various adventures, sometimes on the island and other times in exotic places around the world.*  He had the usual entourage of friends and family that was typical of the genre.

The Whispering Box Mystery was truly top-notch.  The concept was that a device was created that used ultrasound to paralyze.  Brant and friends have to stop a gang of crooks who use it to steal government secrets.  The concept of the whispering box really captured my imagination.

The author, as was standard for this type of book, was a house name, though all the books were written by Harold L. Goodwin.**  Goodwin was a scientist himself and eventually became a high-ranking official for NASA.  He wanted to keep the stories as scientifically accurate as possible.  While there were some elements that pushed the envelope on what was known,*** the stories tried to avoid the more fantastic elements of SF**** and tried to accurately describe the work in the lab.

There were 23 books in the series over twenty years.  A 24th was never published until it came out in a limited edition about 20 years ago.  And by the time I discovered The Whispering Box Mystery, the series was beginning to wind down, and was being pushed off the shelves by the more popular Hardy Boys/Tom Swift books.  I wish I could have found more.

**In the first three, he shared writing chores with Peter J. Harkins.

****Compared to Tom Swift, Jr., who was using antigravity and meeting aliens.

Posted by Chuck Rothman at 7:04 PM

I'm not familiar with this book series. When I was a kid, i read a number of Tom Swift books and another series known as The Three Investigators.

Great stuff. The ones I remember;

The Rocket's Shadow; about a private enterprise rocket to the moon. Think X-Prize written up 'bout 1964)

The Ruby Ray; Unsure 'bout title. About using a laser for delicate surgery.

I loved snow days when I could sit behind the overstuffed chair and read my books.

FREE
Apparently copyright on the later books was renewed and some of them have been reprinted but the purchase price is astronomical.

Recent reprint of the final book The Magic Talisman is just under $60 if there are any left at RickBrant.com The Store.

This is a great series. I was also snared as a kid with The Whispering Box book. In the last few years (for reasons known only to my innermost id), I have been collecting G&D books, such as the Hardy Boys, Nancy Drew, the original Tom Swift, etc. The best series of them all is Rick Brant. I now have all but the last one. I just picked up the second to last in the series, The Deadly Dutchman, for an incredible $9.95. The bookstore owner obviously didn't research his books for young adults, or else he would know that this normally goes for anywhere from $350 to $500 for a collector's copy. This one is in fantastic condition, with no writing anywhere. I actually felt guilty when checking out, but I wasn't going to complain or gloat about it. Just let me out of here before someone notices... Now, if I can only find the last one, Danger Below! for the same kind of price.

There seems to be too many similarities between the two to be coincidence.
Hartson Brant - Dr. Benton Quest
Rick Brant - Jonny Quest
Steve Ames - Race Bannon
Chadha - Hadji
Diz - Bandit
The Quest's home is on Palm Key island.
The Brant's home is on Spindrift island.
Both the books and the TV series have adventures that take them around the world.
Both have an Indian youth that is almost part of the family and travels with them.
Race Bannon is a special agent/bodyguard from Intelligence One.
Steve Ames is a special agent/bodyguard from JANIG (the Joint Army-Navy Intelligence Group)

I was named for Rick Brant, and used to read a few of them when I was younger. Similar to Rick Brant in the books, I've always liked real-life science and electronics instead of science fiction. It's fascinating to me to see the continued interest in the series, but the unmistakable reality and real locations goes a long way toward that, I think. Was not aware of the fantastic prices until reading Zeppo's comments. Hoping also to pick up all in the series eventually, instead of only being able to find some, but not all, through my library. Re-reading all I can find. Will check the sources that Anonymous gives in his comments. Thanks to all.

I thought of these yesterday; the sensitive mimosa is in bloom and I recalled a scene were someone tries to hide in a field of it, with the leaves folding behind him.

I still read them. I'll pick some of my favorites like The Caves of Fear or Stairway to Danger and re-read them. Every few years, I start with #1 and read all the way through to Danger Below, reading one per night. I got hot on a collection a few years back, and assembled full collections of DJs, PCs, and have a number of "Poor" condition "reds" I use to just read and not worry about getting beat up. I sometimes think I AM Rick Brant, or at least I was. It's certainly like having a brother and memories of many real life adventures. The locations have been verified and even characters (such as the bum in Phantom Shark) have been found to be real people, some of which died not long ago. I'm sure Hal Goodwin (the Author) went to these places, met these folks, and took good notes. He was an amazing writer.

Mike A. said..
A friend introduced me to the series back in grade school! (1969) I have most of the books! The only one I am missing are the The Deadly Dutchman and The Magic Talisman! A couple of years ago I found a web suite that had all the books in epub format! Yes! All of them! I still enjoy reading them! In the winter I enjoy starting with the first and going through the whole series! I am a Electronics Engineer BSET who works at programming machines! I am also a certified SCUBA diver instructor! Long Live Rick Brant and Scotty!

I think the first one I came across in the town library was "Sea Gold", and I was so taken by the stories & characters that I'd beg my parents to get me my own copies for birthdays & Christmas. I ended up with most of them up to The Egyptian Cat, at which point I felt I was outgrowing them. But I've always had a soft spot in my heart for those memories of sleeping on the back porch on warm summer nights, reading them by the yellow bug light. 100 Fathoms Under & The Wailing Octopus even inspired me in later years to become certified for scuba! Here's to Scotty, Dr Zircon, Dr Weiss, and the rest of the Spindrift staff!

Lost all my HB, TSJ and RB books in my last transcontinental move. Think from time to time about recollecting them, but are getting more rare and expensive. In the meantime, I console myself with my original 1950's Lionel trains and accessories.

When I was 9 and my father passed away, a friend gave me a copy of The Caves of Fear. I had been reading the Hardy Boys, who were perfect guys in a perfect family. Caves starts out with Rick being anxious about new scientists coming onto the Island. He seemed real. Then there was the code at the end of the first chapter. I was hooked. The heavy water concept was brilliant too.

Just found a copy and reread it. I was struck by the representation of Chaddah as a capable intelligent third world boy, although other aspects of the story are of course dated. Loved the books, and they were great friends at a time when I needed them.

Own all of the RB books (in original covers) except Rocket Jumper and Danger Below which are too hard to find and too expensive to purchase. These books are great and perfect for kids who like to read. These got me interested working in the sciences.