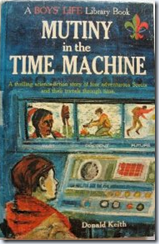 I was the world's worst Cub Scout. In four years, I never earned a single badge.* Every year, we'd get the activity books.  There would be ten tasks to do to get your badge, and I'd be lucky if I got five of them.  And forget the little arrowheads.  I did finish second in the Pinewood Derby, but that's because my father built the car.

The concept was hardly new even back in 1959, when it started. A Boy Scout troop, led by Bob Tucker,**  along with Ellsworth "Brains" Baines, discovered a time machine while out hiking.  Brains figured out how to run it in about five minutes, and off they went forward and backward in time.  Later other people joined the crew, like Kai, a boy from the future, and Dion from ancient Sparta.

The stories were simple.  No time paradoxes here -- just a visit to a time in the past or future where an adventure could happen.  Occasionally, they'd make minor changes to the course of history.

The series was conceived as something of an educational exercise, where the trips to the past would be history lessons.***  And they were excellent adventures; I still remember the excitement when they ended up at the Johnstown Flood.

The author was a pseudonym for a father-and-son team, Donald and Keith Monroe, though Keith wrote solo after 1974. All and all, 23 stories were published, including three serials.  Two of the serials were turned into fix-up novels:  Mutiny on the Time Machine and Time Machine to the Rescue.

The stories have faded into the recycling bin, but, for those interested, Google Books has many back issues of Boys' Life, including those that featured the stories.  The wikipedia page gives links to them.****

**A name that leads to some interesting speculation. You see, back then, Wilson "Bob" Tucker was a big name in SF fandom, creator of one of the first fanzines, Le Zombie. He also published some SF and mystery novels and stories. One of his habits was to take the names of real people (usually other fans) and put them into his stories; he did it so much that fans called the practice "Tuckerization."  So, was Bob Tucker tuckerized in the book?  Hard to say.  But Donald Keith has published SF in Galaxy before appearing in Boy's Life, and it's certainly possible he knew of fandom and Bob Tucker.

***Just like the original Doctor Who, but four years earlier.  Since it was also quickly established the Time Machine could also travel in space, it looks like it was a precursor to the TARDIS.  I doubt the creators of Doctor Who knew anything about the stories -- Boys' Life probably never made it to the UK -- but it's a fun coincidence.

****But only to the first episode of the serials.  You'll need to root around to find the rest.

Posted by Chuck Rothman at 1:02 PM

I could have written your post -- lousy cub scout, dropped out in 6th grade, but a devoted reader of "Boys Life" and in particular of the Time Machine stories. They were great fun and fit right in with all the Heinlein / Clarke / Asimov / Norton 'juveniles' that I read (not to mention the Tom Swift Jr. series). ..bruce..

The Sage of Altadena said...

Flash back! I still remember a serial where they encountered the young Pony Express rider Bill Cody. I loved this series -- and I was a good Cub Scout! My son was a Cub for awhile, and Boy's Life is very disappointing these days -- it's smaller and more like a comic book. And no Time Machine!

Great site you have!! Love the nostalgia, and share an interest in the older juvenile books. Have about 12,000+ and growing juvenile books in my collection and love finding old ones I haven't read to be put on the will eventually read list.

I'm 51 now, and this was one of my favorite books as a young girl. It belonged to my brother, but I "inherited" it as he got older. Though the story involved boys, the interesting characters, friendship issues, the wonder of life lived in the past and future, and the fast pace as they encountered history...wow. My imagination would soar for hours trying to decide where I'd go in a time machine, and what the implications of changing history could be. I hated for it to end, and would re-read it often...