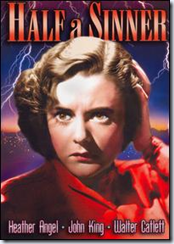 Readers of this blog may not be surprised to hear that for the past year or so I've been slowly going through a set of DVDs of old, public domain movies.  It was billed as a set of mysteries, and it's a mixed bag of film noir, detectives, comic book heroes, and many other dramas, some very good, some terrible, others impossible to hear because of the poor prints. That's why I was surprised to come across Half a Sinner, a pure comedy adventure that's very fast and funny.

Heather Angel plays schoolteacher Anne Gladden, who realizes that she needs to break free and for once in her life forget about responsibilities and just have fun.  She buys a new dress, lets down her hair and stops wearing her glasses* and sets out for a day of adventure.  But it's more than what she expected.  When a masher makes a pass at her, she jumps into his car and drives away.

Unfortunately, she doesn't realize there's a dead body in the back seat.

She soon is being chased by the cops (who think the car is stolen) and by gangsters (who want the body and the incriminating evidence).  Along the way, she gives a lift to a mysterious and charming stranger (John King) and crosses path with a rich dowager with a little larceny in her heart (Constance Collier).

The film is fast paced (it runs 59 minutes), and quite funny.  There is a lot of understated black humor and the plot twists around and back and even when you can guess some of them, they're played with such charm that you don't mind.  The skill of Dalton Trumbo** may be one reason why the story keeps you wanting to watch.

Heather Angel was trying to establish herself as a leading lady after being primarily known as Bulldog Drummond's long-suffering fiancee*** and she is a charming presence.  Alas, here career didn't take off, though she kept on working in small parts.  John King also was a veteran of B movies and later made a name for himself as a cowboy star.

Director Al Christie produced and directed over 400 films, primarily shorts and B pictures.

The movie fell into the public domain, but seems to be marketed primarily as a film noir and mystery (the DVD cover certainly makes it seem much more dramatic than it every dreamed of being). Don't be fooled. What you have is a fast, charming little comedy that a B movie gem.

**Later to be blacklisted, but at this point learning his trade as a screenwriter.

**Every Bulldog Drummond episode seemed to begin with she and Drummond just about to tie the knot when all hell breaks loose.  She spent a lot of time as a hostage, too, but was usually fairly capable.

Posted by Chuck Rothman at 7:51 PM