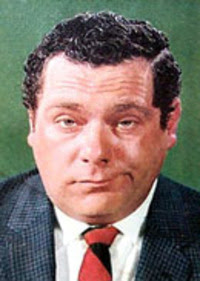 As a kid, I used to watch The Ed Sullivan Show every Sunday.  I was no fan of the highbrow and the circus stuff, and the musical acts ranged from great to uninteresting.  But the one thing I always looked forward to were the comedians, and my favorite of them was Jackie Vernon*.

Vernon worked his way up from strip clubs to becoming a TV headliner with by creating a persona that always brought laughs.  He was a short, dumpy man, and Vernon worked off that by using the deadest of deadpan styles.  His voice was always a monotone, and he would do his routines without showing any noticeable expression other than hangdog.

My favorite was his "vacation slides" routine. Vernon would come on with just a little clicker and would pretend to be doing a slide show of his trip to the Everglades:

This was all delivered without the slightest expression with Vernon's high-pitched voice.  I also loved the way he'd imply what was going on without saying it.

Vernon did record a couple of albums, A Wet Bird Never Flies at Night and A Man and His Watermelon, which sold adequately but didn't make a big splash.  He also never managed to break into films, other than a few bit parts.

But he did make one indelible mark.  The team of Rankin/Bass chose him to do the voice of the main characters in one of their perennial Christmas classics: Frosty the Snowman.  I'm not a big fan of Frosty,** so I rarely watch it, and it is hardly representative of Vernon's comedy.

Vernon was very successful on the various "Celebrity Roasts" of the 70s, his style making the most out of all his material.

Vernon continued his career in clubs and nightclubs, but by the 70s, with the death of the variety show, he was seen less and less on television.  He died in 1987, leaving behind memories of great comedy.

*Not to be confused with Jackie Mason, who was banned from the show, supposedly for giving Ed the finger on air, though he denies it.

**Rankin/Bass were very uneven and usually awful, with the exceptions of Rudolph and The Last Unicorn.

Posted by Chuck Rothman at 7:15 PM

The only thing I remember him from is from the movie Amazon Women on the Moon in the Funeral Roast sketch. I think his bit was cut out because the other comedians got more screen time.

I remember Jackie Vernon when my family went to New York to visit him and his family. I was just a kid but had a great time when he took me to the Worlds Fair in New York. Why would we visit him? He was my uncle. I tell everyone that Frosty The Snowman is my uncle since he did the voice.

Jackie was a hit in the mid 80's at the Marina's "Babes Ahoy" and Riviera "Comedy Club" in Vegas. Always laughed till I hurt. Great humor is difficult to find.

I loved a man and his Watermelon. I got pretty good at telling Jackie's story of the Indian maiden and the brave who swims (almost) across the lake to be with his true love. LaKe stupid was the punchline and it always got my fourth graders laughing uproariously. I preface it by saying it was a story of an old California Indian tribe (which is what we were studying). Great memories of Jackie and his watermelon. I, too, have never been able to find the neck.

I, too, was a kid who loved seeing Jackie Vernon on the Ed Sullivan Show.

He had me laughing for days with his deadpan delivery of this line, worthy of any guru on a Himalayan mountaintop:

The other night, I was re-watching a 1980 PBS documentary, "HUNGRY I REUNION", about the famous San Francisco nightclub. A lot of famous people got their start there. Of the various comics, Jackie Vernon was the ONLY one who really made me laugh. (It was 3 in the morning.) That quicksand story was a riot. I think the fact that there were no vacation slides, just a light on a blank brick wall, and you had to imagine what he was talking about, made it even funnier.

I didn't catch his name. But I typed in the line about the quicksand, and sure enough, up popped your blog. THANKS!

I think Jackie Vernon and Rodney Dangerfield were the two best comedians of all time.
I remember Jackie from the Ed Sullivan Show and his routine and jokes were the best.
Rodney also performed on Ed Sullivan and was the top comedian of all time who also made great comedy movies.

My favorite Jackie Vernon ad lib happened on the Merv Griffin show after the "Poor Little Rich Kid" comic London Lee completely bombed. Afterwards Lee was being interviewed by Merv with Jackie sitting next to him. Lee was talking about how his dad bought this and his dad bought that. Vernon leaned over and interjected "Too bad he couldn't buy a funny kid". ROTFLMAO

I just watched Jackie Vernon on an Ed Sullivan rerun. Never heard of him before and I thought he was very funny. I recognized the voice as Frosty the Snowman after a few minutes and had to look him up. I'm glad I did. I love all of the old Rankin/Bass Christmas shows growing up with them, being born in 1965. It's always been an important part of my Christmas'. I'm related to Larry from the Three Stooges, on my mother's side of the family. I'm sorry I never got to meet him.😢 Sid and Marty Croft Productions is another favorite of mine. What a time to grow up as far as children's television/entertainment/cartoons. Late 60's and 70's. 😍♥️💯👍👍 From Philadelphia PA 🥨🥨🍺🍺

I remember Jackie Vernon from the Merv Griffen show. He had a stage name of Nosmo King. Inspire by a No smoking sign. And he sang a slow version of "If you don't like my peaches,don't shake my tree". He cracked up Merv and the whole audience.