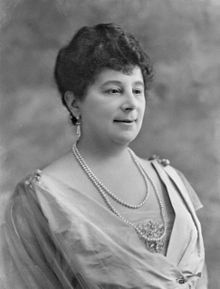 European nobles are not known for their contributions to the arts. Oh, there's Lord Byron, of course, but other than that, it's hard to think of anyone who was successful in the arts, where their bloodlines and money does them no good. But Baroness Emmuska Orczy managed to become an extremely popular writer in the early years of the 20th century.

Orczy was the daughter of a Hungarian baron who moved to London when she was twelve to escape a revolution in his home country. In the late 1890s, she began to write as a way to bring in money, and, after a few fits and starts, ended up establishing herself as a writer of mysteries and adventure stories.

She made her name as a writer of swashbucklers, starting with The Scarlet Pimpernel.  Though the name is pretty much forgotten except as a joke,* it was a major success when the character first appeared in short stories and finally a play in 1903.  The stories were set during the days of the French Revolution as the Pimpernel**, one of the first characters to have a secret identity, fought to rescue nobles from the madness of the Terror.  The Pimpernel was really a precursor to superheroes like Batman and the Shadow, and both better-known heroes had similarities to him.

It is interesting that Orczy, who was uprooted by revolution as a noblewoman, chose as a hero a man who fought against revolutionaries to save noblemen.

But the Pimpernel wasn't Orczy's only literary creations.  She also wrote a series of mystery stories featuring the Old Man in the Corner.

The Old Man -- his real name unrevealed -- was one of the first armchair detectives.  He sits in the ABC Tea Shop and engages reporter Polly Burton*** in conversations discussing the mysteries of the day, all the while fidgeting with a piece of string.  The Old Man does get around -- to visit the scenes of the crime or to watch the trial -- but each story has him staying entirely in his chair.  Like he does with the knots in his string, he unravels mysteries, and finds the solution.  But he never arrests anyone, and often the murderer remains free.  The stories are first class mysteries.

Orczy also had another series about the adventures of Lady Molly of Scotland Yard, the police's only woman detective, who manages to solve crimes by using a woman's eye to see what men have missed.

With these and other series, Orczy was one of the most popular writers of the early 20th century.  Alas, her stories slowly lost favor and the type of swashbuckling adventure of the Scarlet Pimpernel is out of date****

* Looney Tunes parodied it in their classic cartoon, The Scarlet Pumpernickel.

***Whose function is to put forth questions to challenge the Old Man, only to have them shot down.

****Except when they use lightsabers.

Posted by Chuck Rothman at 8:33 PM