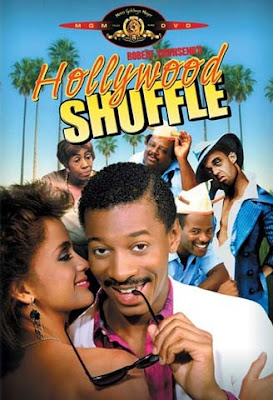 We always like it when a director makes a big splash with his first film.  And it's an especially good story if he does it on his own, in a small independent movie. People like Spike Lee (She's Gotta Have It*), Kevin Smith (Clerks), and Robert Rodriguez (El Mariachi) were able to make critically acclaimed low-budget debuts, and have them picked up by studios and move on to solid careers.

Robert Townsend started out that way.  His first film, Hollywood Shuffle, was shot on a budget of $100,000,** $40,000 of which he raised while maxing out his credit cards and working as a bit player in a handful of movie. And he hit the jackpot:  critical acclaim, a studio distribution, and a foot in the door.

Hollywood Shuffle is the story of Bobby Taylor (Townsend), an aspiring Hollywood actor.  But he has a problem:  as a black man, he keeps coming face to face with stereotyping.

Now, Hollywood was always about stereotypes.  They may have become less offensive of the years (especially the racial ones), but even now characters learn to play a type.  And at the time the film was made in 1987, roles for Black actors were still limited:  pimps, Eddie Murphy types, and other roles that, while better than the demeaning stereotypes of the pre-Civil-Rights days, were still pretty limiting.

The movie hits the whole issue with a biting satire and Bobby keeps trying to get a role that doesn't require him to portray what he hates.  It's somewhat hit or miss*** but very likeable.

The ending is what makes the movie stand out.  It's something of a twist that turns Bobby's seeming failure into a real success, letting him do what he's been wanting to do in a surprising way.

Townsend was able to pay off his credit card bills and establish himself as a director to watch.  Alas, it didn't pan out.  He directed Eddie Murphy Raw, not the type of film that gets and director noticed, then had a series of flips:  The Five Heartbeats, The Meteor Man, and BAPS, none of which made more than $9 million in the box office.****  He moved to TV, but still hasn't done anything of particular note.

Hollywood Shuffle may be a bit dated, but the issues it raises still exist, and it's final message is something everyone can take to heart.

*He also did several student films, but She's Gotta Have It was his first film on his own.

**Remember, this was still the film era, where the cost of shooting was greater.

***There's a overly long section with Keenan Ivory Wayans (pre In Living Color) portraying one of a Black "Siskel and Ebert" pair of movie critics that isn't all that funny and really clouds Townsend's point.

****Though they did make more money than Hollywood Shuffle.  Still, they also cost far more than $100,000 and were a loss in real accounting, not just the Hollywood version.

Posted by Chuck Rothman at 9:47 PM