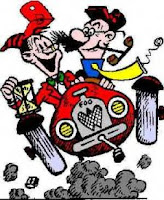 Back when I was growing up, you usually had a selection of newspapers. And that meant a selection of comics.  We grew up on Newsday,* but on Sunday there were choices.  We got the Times, but they had no comics and I much preferred visiting our neighbors who got the Long Island Press (with a strip we had never seen called Peanuts) and, occasionally, the newspaper with the best Sunday comics around:  The Daily News.

The News had Dick Tracy; it had Terry and the Pirates**; and it had Smokey Stover, one of the wildest strips ever written.

The strip was created by Bill Holman.  Holman evidently loved firemen, and, after working on several newspapers as a spot cartoonist, managed to sell the concept of Smokey Stover to the Chicago Tribune Syndicate -- the big league of any cartoonist of the day.

Smokey was a fireman, working for his Chief Cash U. Nutt and living with his wife Cookie and son Earl.***  But that didn't really matter.  This was a gag strip and Holman was never content with one gag.  Or two.  Or five.  There was one central gag but every panel was filled with visual puns and off-the-wall jokes.****

The gags were groaners, as were the puns and wordplay, but I loved them.

As was appropriate, the strip was drawn in a very cartoony style.  Smokey wore a fireman's hat with a hinge in it, and drove in a two-wheeled vehicle called the Foo Mobile.  "Foo" was an all-purpose word in the strip, showing up all over the the place.*****  Even more mysterious to me was the phrase "Notary Sojak," which no one really understood, but everyone noticed.§  Another of his phrases was "1506 Nix Nix."§§

Holman continued with the strip until his retirement in 1973, and when he retired, the strip went with him.§§§

It has rarely been reprinted, but no one has ever matched its combination of screwy humor, dumb jokes, and puns that made you groan.

*And for a short time, with The Suffolk Sun, an attempt to start a new paper for eastern Long Island, but which had little to recommend it other than the fact that it was the first newspaper to have color comics on weekdays.

**The George Wunder version.  I hated his art simply because all the faces looked the same.  Men, women, and children all had the same face with different hair or maybe some freckles.

***By the  time I saw the strip, Cookie and Earl were rarely seen, and they never bothered mentioning the name of the Chief.

****I'm mostly familiar with the Sunday strips; the dailies probably had fewer.

*****Holman gave various explanations of where he got the term; the most common was that he found it at the bottom of a Chinese statuette.  The word was appropriated for cartoons, and to the military (posibly as "fubar"), and to UFOlogy, where "foo fighter" (used in the strip, too) was used as a name for UFO and eventually a rock band.

§ Holman said it was Gaelic for "Merry Christmas."  Maybe.

§§The explanation of this was consistent, if strange:  it referred to room 1506 in a hotel; the "nix nix" mean "no."  The story was that someone told him to stay clear of the hotel using the phrase.

§§§ Highly unusual for a comic in that time.  Once a creator stopped, the standard practice with a successful strip was to hire a new artist and continue with it.  The only exception back then was Krazy Kat.  Of course, more recently, Bill Waterston was able to quit Calvin and Hobbes and Gary Larsen discontinued The Far Side.  The feeling today is that the public won't accept a strip from a new artist.

Posted by Chuck Rothman at 8:18 PM

Smokey Stover was one of those strips I'd jump to when reading the Sunday Daily News back in the day. It's a classic that by now should've been given the trade paperback reprint treatment. Some of today's readers might get the jokes and draw their own conclusions.

Also, Smokey was included in 1971's "Archie's TV Funnies" for his only TV exposure. A pity no one tried to bring him back after that, unless Holman specifically had certain restrictions post-retirement.

10/9/11
RobGems.ca wrote:
Apparently, Bob Clampett was a reader of "Smokey Stover", and liked the word "foo" as well; the word appears in the Warner Brothers' 1938 cartoon "Porky In Wackyland." On the 1970 "Archie's TV Funnies" TV Show, "foo" was repeated as a catch-phrase, usually by the firehouse cat.

Fun to be reminded of Smokey. Among his absurd comments and phrases, you ledt out "dirty rackefratz" which three generations of our family--only one of whom ever saw Smokey--uses as a socially acceptable swear word....as did Smokey