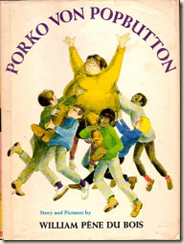 Back in the 1960s, Sports Illustrated was struggling.* The market for a sports only magazine, especially a glossy one with photos, was small.  So it did many different things to try to attract readers:  articles on non-mainstream sports and some odd features.  And once, they even published a children's book.  Beat the Queen was one of their few forays into fiction of any kind,** but it was a great one.
Beat the Queen is the story of Patrick O'Sullivan Pinkerton.  Pat was fat.  Extremely fat (in the first paragraph, his bed falls through the floor of his house).  His parents send him off to the President Coolidge School for Boys, where he is separated from his beloved food.
The school is a sports-mad institution, and that sport is hockey. His roommate is the irrepressible Jim "One-Point-Two-Five" Finger***, goalie for the team.  Jim dubs Pat "Porko von Popbutton," and takes a liking to him, having him help with practice and teaching him about their archrivalry with Queen Mary School, the reason why there are big signs all over campus saying "BEAT THE QUEEN."
And then Pat discovers an interesting fact:  He's almost the same size as a hockey goal.  So he decides to don the pads and become a goalie.
I think you can probably guess how this ends up.****  But the story is charming.  Pat is perfectly happy with himself; he may be fat, but he likes it that way.  He wants to keep eating, even though everyone wants to stop him, because it's something he truly likes to do. Du Bois makes it clear that all the sympathy is for him, and not for those who are trying to help him.
Jim is also the type of friend that many people would love to have. He may tease Pat, but it's never malicious, and ultimately it's clear that he does like his roommate.
William Pene Du Bois was an author and illustrator, winner of Newberry Medal (Children's literature's highest honor) in 1948 for The 100 Balloons and gaining Caldecott Honors (for being a runner up for top children's illustrators) twice.
The story was published soon afterwards as a book, with the title changed to Porko von Popbutton. If anyone was looking for it due to the Sports Illustrated article, they may have missed it, but Du Bois was well established enough at that time so it probably was successful.
Alas, despite the delights of the tale, it's out of print.  I would guess that, with childhood obesity a serious problem, the subject matter is a bit touchy these days, and children's literature likes to avoid controversial positions.
But if you have a little time, read the story at the Sports Illustrated website. It's something people of all ages can enjoy.
_______________________________________________
*It ran at a loss from its founding in 1954 until about 1968
**About a month earlier, they published a tongue-in-cheek article about how the New York Jets would win the Super Bowl. It was meant to be a joke, but, oddly enough, predicted that the Jets beat Oakland (who had to face a division playoff because they were tied for first) and Baltimore.  Those opponents were exactly how things worked out.
***The nickname is his goals against average.
****The problem with stories about sporting events is that there are only two outcomes at the event.  You can usually assume the underdogs will win, mostly because it's hard to write an ending where they lose that feels satisfying. In any case, Pat does end up tending goal in the big game.
*****One of the highest honors for a children's book author.
Posted by Chuck Rothman at 1:17 PM

Thanks for posting this! One of my favorite children's book is Walter and the Flying Hockey Stick, written about the same time. Ever read that one?

I remember this book as a kid 40+ years ago...cute story that still brings a smile to my face. Probably wouldn't play too well in today's PC world...

I remember having this book read to us at summer camp in Maine. I actually ordered a copy of the book online yesterday before finding this website and, ultimately, the entire story on the Sports Illustrated website. A great story that brings back memories.

Can't believe I've found this - thanks so much! I remember the story as a kid but did not know the name or author. Over the last 20 years I have searched off and on with no luck until now. No one else ever remembered "a book about a fat kid playing goalie". Now, you have put me in touch with a lost bit of my youth. Thanks again!

In the seventh paragraph of this article, that author wrote: "William Pene Du Bois was [the] winner of Newberry Medal (Children's literature's highest honor) in 1948 for The 100 Balloons . . . ." The title of the book was actually "The Twenty-One Balloons."

A PDF of the story is here.
http://giannoandfreda.com/files/beat-the-queen.pdf

I was absolutely perplexed to read your summary of the story, because when I read the story in elementary school the one absolute takeaway, was that once Pat O'Sullivan Pinkerton had achieved a goal and had some self respect and a purpose, he lost 125 pounds and became the person he was capable of being. Nowhere was there any fat acceptance or fat liberation undertones. In the face of actual achievement his goals and his appearance changed.