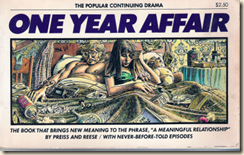 The influence of The National Lampoon on modern comedy can't be overstated. People know it for Animal House and the Vacation films, but it was much more.  Saturday Night Live, for instance, owes much to the magazine.*  People like John Hughes, P.J. O'Rourke, Chris Rush, Bruce McCall, Chris Miller, Doug Kenney, Henry Beard, and many others.

One of the Lampoon's features was their comic pages, featuring top comic artists and writers doing some of their best work, with plenty of creative freedom.  And, hidden among people like Gahan Wilson, M.K, Brown, Shari Flennikan, Vaughn Bode, and many others, was a small unassuming strip by Byron Preiss and Ralph Reese titled One Year Affair.

The strip started out with an ominous note:

Just 52 weeks from today, the characters introduced here will terminate their relationship . . . This, then, it the ignominious beginning of a . . . ONE YEAR AFFAIR.

Her reply:  "Thanks.  Why don't you take one of these as a reward?"

And so the relationship begins.

The man is Steve, who finds the woman's name is Jill and gets her phone number off some "For a good time, call Jill," graffiti on a men's room wall.

Jill is a terrific character.  She sexy, uninhibited, happily promiscuous**, and shameless.  Steve is a schlub and know that Jill is out of his league.

The strip appeared each month in the Lampoon, usually four panels showing the latest ups and downs of their relationship.  Steve's insecurity and Jill's past were all fodder for humor, as were landmarks like moving in together.  The relationship flourished, fell apart, got together, all with some wild ideas and and plot twists.

And, as promised, the relationship ended.

The humor and twists still work, even if the dating world portrayed is long gone.  It often verged on soap opera (especially near the end), but managed to remain fresh and funny.

After the run, Preiss and Reese started a strip new strip for the Lampoon called Two Year Affair, which tried to focus on three people, but it only ran a couple of time before being dropped.  Preiss went on to for Byron Preiss Visual Productions, which collected the strips into book form.  BPVP went on to be a successful publisher of graphic books and then of packaged novels.***  He died in 2005.  Ralph Reese continued to work regularly in comic arts.

* John Belushi and Chevy Chase joined SNL after a stint on the off-Broadway revue National Lampoon's Lemmings.  They also worked on the National Lampoon Radio Show with Gilda Radner and Bill Murray.  Michael O'Donoghue, a Lampoon stalwart, was an early writer and one of the original Not Ready for Prime Time Players.  Anne Beatts was another NatLamp writer who started writing for SNL.

**Remember, this was after the sexual revolution and before AIDS.

***Preiss would pitch ideas for book series and sell them as a package, hiring authors to then write them.

Thank you for this. Was thinking about this book today and was led to your site. Ralph Reese has always been one of the best, underrated artists on the planet.

Great article.
I wondered what ever happened to to this.
You should proofread the the page, though.

I used to carry a panel from this strip in my wallet when I was dating. In it, the couple are in bed and she is describing all the characteristics of her perfect man. In the last panel he says, "if you find a guy like that I'll F him." I've started dating again 30 years later and the 50 yo women on Match.com are still as picky today, with absolutely no understanding of a diminsishing asset.

I was searching "One Year Affair" after remembering that this was my favorite comic strip of all in National Lampoon. My older brother having given me his issue of National Lampoons Comics:the best of when I was like 13, having read this strip took me into a world full of possibilities.A world which, for a transgender woman who, back in 1974-75 at Newtown Middle School was a long way from discovering her inner self; for whom the lifestyle depicted in One Year Affair would be but a dream.