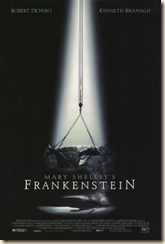 I first heard of Kenneth Branagh when he was nominated for Best Actor and Best Director for Henry V.  I was surprised to hear it -- I missed the movie when it came out, and I knew how highly regarded Lawrence Olivier's 1944 version was. I wondered how this first-time director could be compared to what was considered one of the best Shakespeare adaptations ever.

I discovered that Branagh's version was just as good.  And, after Dead Again and Much Ado About Nothing, he became one of my favorite directors.  So I was very interested in his take on Frankenstein.

The movie, alas, has a bad reputation, but I loved it.

Branagh (and writers Steph Lady and Frank Darabont) did something brave:  instead of showing the familiar story, they went to the original book, which is nothing like what moviegoers were used to.  Frankenstein's creation really wasn't a monster,* but was thoughtful and intelligent. And, Branagh made a brave decision:  he filmed the story almost as an opera, with bravura performances that were over the top just a tad, but which worked that way.  He also made important artistic choice in sticking fairly closely to the book.

The melodramatic elements work perfectly.**  Robert DeNiro's performance is clearly a different version of the creation than any other, giving it a gravity and depth rarely seen.  He's more pitiable than monstrous, and DeNiro was still at the height of his acting career.

Branagh's Frankenstein is the scientific genius who ends up regretting his enthusiasm.  He dominates the screen, making his anguish very real.

The film started out with some bad critical buzz, however.  Producer Francis Ford Coppola wanted Branagh to cut the first half hour. Branagh refused and Coppola denounced the film.  And when it came out, people who were not attuned to the bravura felt it was a bit silly.*** It was a box office flop; people who wanted a bloody monster movie were inevitably disappointment and the audience that might have liked it were turned off by both Coppola's comments and the fact that they thought it was a bloody monster movie.

Branagh's career stumbled a bit with this and the obscure In the Bleak Midwinter, but he scored an artistic triumph in his full-length version of Hamlet.  But the film didn't do well, and he's has been turning to acting rather than directing.

The movie is not for all tastes and if you insist on "realistic" portrayals, don't bother with it.  But if you like larger than life characters and emotions -- opera without music -- the film is an unusual take on the legend.

*Other than the fact he was ugly.

**Most of the time.  The scene of the creature's creation, where he and Frankenstein are slipping in the amniotic fluid that gave it birth, does seem like slapstick.

***It also inspired one of the stupidest critical comments ever, when one reviewer wondered derisively why the movie started out with a scene in the Arctic. This is precisely how the Shelley novel started out, and the move clearly indicated by its title that it was Mary Shelley's Frankenstein.

Posted by Chuck Rothman at 7:16 PM