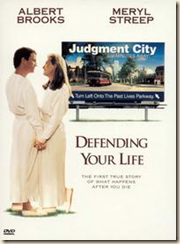 I first became aware of Albert Brooks when I was in college and his album, Comedy Minus One, showed up at our radio station.  The first side was a very funny standup routine, but the title track (the entire second side)*was inspired:  a comedy routine, only Brooks was the straight man and you were the comic.  The dialog was included, so you could make a fool of yourself reading it and having Brooks respond (with a laugh track).  I knew I wanted to see more of him.

Brooks has been called "literally a comedian's comedian," since his father, Harry "Parkyakarkus" Einstein.**  After trying his hand at standup, I next heard of him as a writer and maker of short films in the first season of Saturday Night Live.  In 1979, he made the film Real Life, possibly the first proto mockumentary.***  He made two other films in the 80s (Modern Romance and Lost in America), to good critical notices and mediocre box office.

Defending Your Life was his fourth feature and his best. Daniel Miller (Brooks) is a self-centered yuppie who is killed by crashing his brand new BMW into a bus. He wakes up in Judgment City, where the lives of the newly dead are judged before sending them to their permanent home -- and how you are judged determines where you go.  While there, he meets Julia (Meryl Streep), someone who lived an exemplary life and clearly will be moving on to a higher existence.  Miller's chances are not very good, and he may be doomed to go back to Earth to be reborn and try to get it right.

Brooks is fine, though this is a typical role for him. Streep is excellent in a difficult role. She is able to be Mary Poppins perfect without being cloying. People remember her in her serious roles, but it's often overlooked that she's a very talented comic actress.  Rip Torn gives his usual strong performance as Bob Diamond, Miller's representative at the tribunal, who tries his best despite his doubts.

The film is filled with clever touches.  Judgment City is like a cheesy resort (though there is a hierarchy -- Julia's hotel is better than Miller's more touristy version). People ride around on trams that were originally used for the Universal Studio tours.

What makes this film Brooks's best is its message, which is that we need to face our fears and learn from our mistakes.  Miller -- like many of Brooks's characters -- is neurotic and tentative in everything he does, and he has to learn to leave that behavior behind.  The ending is extremely satisfying and really says a lot about how to live life.

The movie did well enough at the box office to give Brooks other chances to make films.  He followed it up with Mother, about a science fiction writer who was blocked due to issues with his mother (played very nicely by Debbie Reynolds) and The Muse, about a filmmaker who was having trouble writing his next film until visited by an actual muse (played by Sharon Stone).  Neither was a big success and Brooks continued with acting and especially voice acting, where he became an voice star as Marlin, who spent an entire movie Finding Nemo.

It would be nice is Brooks returned to writing and directing again (his last attempt, Looking for Comedy in the Muslim Word, was a flop), but he has a good list of quirky and neurotic comedies, along with the excellence of Defending Your Life.

*Back when records had two sides, children.

**Yes, Brook's real name is "Albert Einstein."  He tells the story that he once asked his father about it, and his father said he never heard of the other Einstein, though Brooks has also commented that his father was probably joking. Brooks is also brother to "Super Dave" Osborne.

***Zelig came out in 1983, This is Spinal Tap in 1984. The main difference was that Real Life was scripted, while the standard mockumentary is ad-libbed.

Posted by Chuck Rothman at 8:11 PM

It's been years since I watched this movie, but the "past lives" scene is really hard to forget!