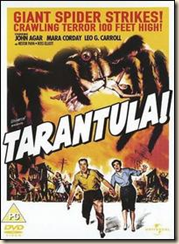 Giant insect movies of the 50s get a bad rap. The science is impossible, of course, and many (but not all) of the effects are crude compared to modern techniques.  And there's the glib oversimplification that they were a reaction to the fears of the atomic bomb. Of course, some of the movies are quite bad, too.

But there are a couple of gems.  Them! is well-known and highly respected, but lesser known was Jack Arnold's Tarantula*.

I've written about Arnold before, but if the name means nothing to you, it should.  His 50s science fiction films are all minor classics:  It Came from Outer Space, The Creature from the Black Lagoon, Revenge of the Creature, The Incredible Shrinking Man.  He was able to take some very silly SF concepts and turn out classic films using them. Any one of his films has surprises that make them stand out from the ordinary monster flick.

Tarantula is the story of Professor Gerald Deemer (Leo G. Carroll). One of his assistants is found dead with an advanced and unusual case of acromegalia.** The local doctor, Matt Hastings (John Agar) tries to get at the heart of the mystery and when the dead assistant is replaced by Stephanie Clayton (Mara Corday), Dr. Hastings drives her to Professor Deemer's lab.  There they discover Deemer is working on a formula to increase growth in animals as a way to relieve hunger.  But Deemer has been accidentally injected with the formula -- and a tarantula that had been injected has escaped.

The plot involves the obvious:  the tarantula keeps growing and growing, killing people and terrorizing the community. But it also concentrates on Professor Deemer, who is not a mad scientist, but someone who genuinely wants to develop a scientific breakthrough, and who has to race to keep his own creation from killing him like it had his assistants.  Leo G. Carroll*** does a fine job as a man under a self-inflicted death sentence and who may not be able to do anything about it. 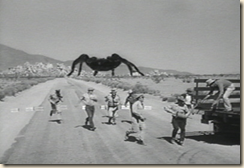 The effects on the movie are surprisingly good, due to the decision to use a real tarantula as much as possible.  And while giant spider legs are probably not convincing in close ups, the long shots work very well.

The film is also notable in being on of Clint Eastwood's first roles.  He plays an air force pilot trying to kill the monster, but is unrecognizable under his oxygen mask.

The film was a hit, and Arnold continued on a successful career in film and later television. But the film got lumped in with other giant monster films like The Deadly Mantis and The Giant Gila Monster as a sign of how bad films of the 50s were.  It is probably the least well-known of Arnold's SF films, but is nothing to sneer at.

*Yes, I know a tarantula is not an insect.  Let's keep this is a nitpick-free zone.

**An actual disease -- it's a glandular condition that causes abnormal growth.

***A favorite of mine from the TV shows Topper and The Man from U.N.C.L.E.

Posted by Chuck Rothman at 7:53 PM

While I did enjoy this flick, I've never been really impressed with the "real life" creatures superimposed in the scenery. Similar to the monitor lizards and alligators of other B-grade movies.

Still enjoyed it, though.

What made this better than most of the others was they they didn't have the monster walking around obvious model houses and cars. They tended to just show it in front of a back projection of the desert and did a nice job of matching (as the example photo shows). It works pretty well overall.

You've convinced me to give "Tarantula" a try. If I'm too freaked out by the spider I will distract myself with John Agar's hunk factor.