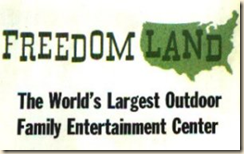 By 1950, the American amusement park was dead.  What were once the jewel destination of urban areas had deteriorated into a place for carnival game ripoffs, it they remained open at all.  In fact, when Walt Disney tried to get money together for one in the early fifties, he found it next to impossible.*

But Disneyland showed that you could create an amusement park in a suburban setting and have people flock to it. And people tried to follow suit.

This included Cornelius Vanderbilt Wood.  Wood credentials were golden:  he had worked with Disney to help create Disneyland.  After a falling out,** he struck out on his own, forming Magic Mountain in Denver and Pleasure Island in Wakefield, MA. Then he went on to the biggest market in the country -- New York City.

And Freedomland U.S.A. was born.

Wood chose an American history theme for the park, and took it all the way.  It was shaped like a map of the US and was divided into sections like "Old New York," "Old Chicago," "New Orleans," "The Great Plains," "San Francisco," and "The Old Southwest."  Each section had a rides and exhibits tied in with the theme.  "The Old Southwest," for instance, included the Burro Trail (real burros), Mine Caverns, Pony Express, Opera House and Saloon (non alcoholic drinks and entertainment), and Casa Loca (a house built all askew so perspective was messed up).  It was billed as "Disneyland East."

I visited the park the first year it opened.  I remember wanted to ride the burros (though the line was very long) and the Casa Loca.  Great stuff when you're eight.

Of course, there were problems.  While the park had plenty of parking, it was not easily reachable by public transport. And running an amusement park in sunny southern California gives you many more days of operation than around New York City.

Though it attracted good crowds the first year, it couldn't sustain it.  The "Disneyland East" comparison only made sense if you had never seen the real Disneyland. Wood may have had some interesting design ideas, but the park, even new, didn't have the "spare no expense" design that made Disney a hit.

Attendance continued to drop.  Attempts were made to attract a teenage audience, but that was doomed because of the poor public transport.  Finally, in 1964, the park, citing competition from the New York World's Fair, closed down.  The land was sold to build Co-op City (an apartment complex) and was quickly torn down.

Some of the rides and equipment were sold to various amusement parks, several to The Great Escape in Glens Falls, NY.  When I visited there several years ago, I didn't realize that the Cyclone ride had been taken from the original Freedomland. Alas, once the park was sold to Six Flags,*** the Freedomland remnants were slowly retired.

Very little exists now, except in memories and web pages.  But, for a short while, at least, Freedomland was the future of fun.

*He finally convinced the fledgling ABC TV network to bankroll the park in exchange for the rights to a TV show featuring Disney movies and characters.  Disneyland was ABC's first top five TV show, so both sides made out well in the deal.

**Disney removed Wood's name from any history of the park; as far as they are concerned, he never existed.

***Whose corporate mission seems to be to make visits there as unpleasant as possible, and makes it quite clear that they think their customers are cash cows to be milked dry.

Posted by Chuck Rothman at 8:51 PM

Good summary of Freedomland, Chuck. I grew up outside the park and planned to work there as a cowboy in Ft. Calvary when old enought, but they took the park from me before I was 10. Used to watch the fireworks from my bedroom every night. I have become a total buff on the park and another former Bronxite has just produced a DVD on the history of the park. BTW, Co-op City's buildings were not built on the park. The Bay shooping center adjacent to the apartment complex was home to Freedomland, though a small portion may have spilled over to the apartments area. The parking lot is not coverered by many of the buildings. The remaining undeveloped land at the back of the shopping center has a few remnants of the park among the weeds. This is the concrete dock and one wood piling from the Fur Trappers boat ride, though it is in a heap and looks just like rubble. I did find in this area a foot-by-foot concrete slab that contained small pink tiles that definately did not come from a house or commercial building. The slab is much too thick and the tiles are similar to the style you would have seen at an amusement park at that time. It could have come from one of the many fountains that dotted the park, or from one of the buildings or other attractions. My son kids me and says it is probably from a woman's bathroom. Contact me if you want to communicate about the park.

The common mistake by those who "remember" Freedomland is to try and join in with the critics band wagon of the park and be so sure of what the park lacked just because it closed after 5 seasons. First of all Freedomland was as good as or better than Disneyland compare the years 1960 Freedomland to 1960 Disneyland. Both were very good! Freedomland was not a cheapened Disneyland at all, and as far as the attendance it was very good for the first 4 seasons, and waned in 1964 but still adequate. Freedomland's closing was for one reason and that was to get alot of money quickly for a housing project. Which was part of a building plan in 1959 when Freedomland was announced. Sure, it was tough financially the first year and other years, but it was also that way for Walt and Roy when Disneyland opened and had it not been for a show on ABC Disneyland could have become Co-Op City Anaheim style.
Freedomland USA was a well designed and built park that is loved by many of it's fans and deserves not to be looked upon poorly. See www.freedomlandusa.net

Well, I visited Freedomland as a kid and did love it, but once I saw Disney, I knew it wasn't in the same class. Good, but it never had the extra effort or imagination that made Disneyland and Disney World successes. Even looking at the rides and pictures, there's really no comparison. Disney, of course, had the advantage of ready-made characters, but Freedomland really wasn't all that much better than Frontier Land in the Adirondacks.

What date did Freedomland open and what date in 1964 did it close?

Freedomland opened on June 19, 1960and closed in 1964 after five seasons in operation,I have been to disney world eight times,disneyland once, freedomland six times and freedomland was the best,the main reason freedomland closed was pressure to built co-op city which was built on freedomlands huge parking lot, the shopping center was built where freedomland stood,today all that remains of freedomland is the base of the freedomland inn and some of the fur trapper ride,it was a great amusement park.

I loved Freedomland! My parents to us a few times and with each visit we discovered something new . I will never forget eating in a 'Southern Pavilion"with all the staff dressed magnificently. We ate fried chicken with HONEY over it! It was delicious.To this very day I serve or ask for honey with Fried Chicken. I remember also going into Casa Loca which was was amazing. They had a pool table that was tilted and the balls rolled the wrong way. Our Mother felt dizzy after seeing that and had to leave the house. It was unforgetable.
What a shame that it closed.

My parents took us to Freedomland many times and we always enjoyed being there. Just this week \, my mother presented me with a disk that she had made from slides of my childhood. I have about 15 pictures of Freedomland that include: the Chicagoo Fire, 2 large Showboats, the train, Old New York with China Town, the Civil War ride, that high-up overhead ride where you can see the entire park, that world famous cow (what was her name?), Fort Calvary and a few more! What a memory trip !!!

I lived on Long Island as a child and we went to Freedomland 4 times. I've also been to Disneyland once, but I was a teenager by then. I think a lot of folks that say Freedomland was just as good or better than the more lavish Disney parks, has to do with the age you were when you went. I was six the first time and ten the last time. Everything is more magical and exciting when you are that young and I was sorry it closed too. BTW, Frontier TOWN (not LAND as the commentator above said) in the Adirondacks is NOT as good as Freedomland was (If it's still open, which I doubt).
I look forward to getting the DVD they just put out. Hope the quality is better than an 8mm film lol.

by the way it's Rob Friedman.. (not freedman) and the site is back up after being down for about 1.5 years.. you can get there easily with http://welcome.to/freedomland

uh seems the redirection site went down. plus I had to move the site a few times.
it now resides on x10host..
so the url is http://freedomlandusa.x10host.com

seems it did not go over as nicely as i hoped so I am fixing some coded pages sorry.. but it is for the most part up

Went to Fredomland in 1960 or 1961 what I remember was seeing the Four Seasons for the first time.The group was on a small stage in town . I was with my girlfriend and Bob Gaudio kept flirting with her,but she went home with me. And not knowing at the time they would be so famous. Jay Andrews now retired in Sarasota FL