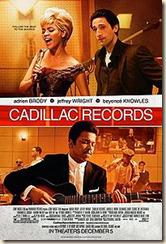 I love the blues. I was first introduced to it in college, probably by a roommate who loved the Allman Brothers.*  I started finding other acts (Buddy Guy and Junior Wells played locally, and I loved it) and soon became a major fan.

And if you're  a fan of the blues, it's essential that you see Cadillac Records.

The movie is the story of Murray Chess of Chess Records, a company instrumental in popularizing the blues and making it one of the roots of rock.

These names should be more familiar to everyone; they are all in the Blues Hall of Fame and Rock and Roll Hall of Fame (deservedly so), and their success was due to the fact that Murray Chess was on the lookout for new talent, regardless of race.

The story is pretty much the story of the company under Chess. There's actually not much of a narrative arc, just incidents showing the music being created.  Most are very nicely done.  One of my favorites is this group of grubby English musicians showing up at the studio and immediately recognizing Muddy Waters.  "We named our group after one of your songs," they say.  "Which one?" asks Muddy.  The answer, "Rolling Stone."

There also an indication that Chess, much as he loved the music, was a businessman:  the movie title comes from the fact that he gave his top artists Cadillacs -- taking the money from their royalties, though.

I got the impression that the movie takes some liberties with the actual stories, but that doesn't matter.  It's worthwhile just to show how the roots of rock got started.

The movie got good reviews, but did only s0-so in the box office.  The soundtrack did well, probably on Beyonce's name (though she does a good job as Etta), and there was a small controversy when the real Etta (the only one of the people involved who is still alive right now**) complained about Beyonce appropriating her song.

If you're interested in the roots of rock, and have a liking for the blues, this is a film to see.

* I actually had already seen them in concert twice, but they made little impression on me.  But my roommate kept playing their music, including The Allman Brothers Live at Ludlow's Garage (which wasn't released until twenty years later, but he had worked there and had the tape).

**Other than Hubert Sumlin, who shows up in one scene as Howlin' Wolf's guitarist.

There were two Chess brothers, Leonard and Phil. Basically one got written out of the movie. Film wasn't bad.

And now Etta James is gone too