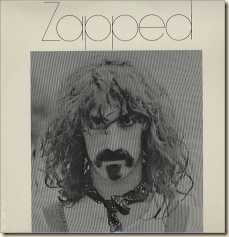 Music success is all about promotion. Every artist and record company has to find ways to get their songs out to a potential audience.  Companies try various ways, but, for a short time, one method was the sampler album.

A sampler was different from a compilation (say, That's What I Call Music). The record company would put out a record* with songs from new upcoming artists and then sell them very cheaply, usually only through mail order. Warner Brothers records did this a lot in the late 60s and early 70s with their Loss Leaders series; whenever you bought an album they'd have a list of samplers that you could pick up for $2 for a double disk (very cheap even then).

At this time, the great Frank Zappa ran not one but two record labels:  Bizarre Records and Straight Records.  Since both labels were distributed by Warner Brothers, a sampler was released.  Zapped was only one disk, and sold for $1 (plus postage, I believe)

The album was a masterpiece of the avant garde of the time.  The 13 songs included**:

It hard to say how well the album sold:  it was cheap, but not sold in stores, and clearly these were not acts that were going to make gold records.  Alice Cooper was the only one to who did.***  Zappa/the Mothers and Captain Beefheart continued on long careers until Zappa's death and Beefheart's decision to give up music for painting.  Jeff Buckley died young; Lord Buckley had died a decade before the album was released.

The LP is now very hard to find (except, of course on eBay, where it's pretty inexpensive).  There was no effort to convert it to CD.  Indeed, I'll bet many of the artists here are just not available any more. But it's a great look at how record companies back in the day were willing to sign acts on talent as much as their commercial potential.

*These predated CDs by a decade.

**There were actually two slightly different versions of the record, with some different songs.  The second version replaces "Refrigerator Heaven" with "Reflected'; "St. Nicholas Hall" with "Horses on a Stick"; "Governor Slugwell" with "The Train"; and "Holiday in Berlin" with "Valerie."

*** I remember being astonished hearing "I'm Eighteen" making the charts; I never expected them to be that popular.

Re: Records & "These preceded CDs by a decade"--what?

Owned it. Mailed away for it when it came out. Fried my teenage brain, and I was already into The Mothers... Bought Beefheart... then traded the album away...

As for Alice Cooper it's "Reflected" not "Refrigerator Heaven".
I have this album but it's the other cover of Zappa
w/ a collage of other artists.
Cool site.

They changed the following 3 tracks

I'm Looking At The Original Order Form On An Old LP I Just Bought. Of Coarse It's Not Jeff Buckley #!?®$!! But His Father Tim Buckley. And Yes It Does Include Alice Cooper "Refrigerator Heaven" Along With "Titanic Overture" But "Reflected" Is Not Listed. For This Version At Least.