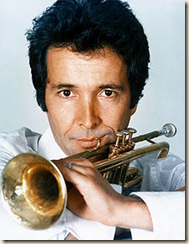 He was a top music act, playing a style of music that was not only inauthentic, but went against every trend in popular music of the time.  But Herb Alpert made it all work, so much so that at his height, it was not unusual to find his records in collections along with groups like the Doors and the Beatles.

Alpert played trumpet, an instrument that no longer was on the forefront of popular music at the time he was making his mark.  He probably wasn't even the greatest trumpet player of his time. It didn't matter.   He really had two things going for him:  a distinctive sound and the ability to find great, catchy songs and arrange them so that just about anyone could love them.

But Alpert wanted to perform.  Setting up a recording studio in his garage, he started looking for a hit.  Sol Lake, a composer friend, wrote a pleasant little song called "Twinkle Star" that Alpert liked a lot, but wasn't sure how to arrange. While vacationing in Tijuana and pondering the issue, he heard a Mariachi band outside a bullring.

That was the sound he was looking for.  Renaming the song "The Lonely Bull," Alpert recorded it in Mariachi style and added sound effects.  He then pressed the record out of his own pocket and on his own label, then started playing it for local DJs, hiding the fact he was the only one on the record by naming the group "The Tijuana Brass."

It was a smash, reaching number six on the charts.  Alpert and the Tijuana Brass was in business.

And what business it was.  The album of The Lonely Bull was a further smash, with Alpert playing all the music himself (he'd play the trumpet part twice, one slightly out of synch so it sounded like there were two musicians).  After this success, Alpert hired an actual band, which allowed the group to perform at live venues. 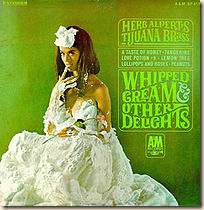 Meanwhile, Alpert put out more smash hits.  His albums Volume 2 and South of the Border were big sellers, but the group really made its mark with Whipped Cream and Other Delights.  The albums iconic cover was guaranteed to catch the eye of people browsing record bins.  It also inspired many parodies and tributes.

Alpert wasn't done.  He continued to put out number one albums all through the 60s with music that was peppy and tuneful.  He even had a top ten single by singing* the Bachrach-David "This Guy's in Love With You."  Some of my favorites include "The Lonely Bull," "Tijuana Taxi," "Spanish Flea," "Casino Royale."  All the Tijuana Brass songs were catchy and fun to listen to.  Alpert got away from the Mexican shtick as time went on, but the group remained popular into the 70s.**

Nowadays, it's rare to hear about the Tijuana Brass.  They don't fit into the classic rock format, and the interest in pop instrumentals of the era is limited.  They are probably the biggest chart act of the sixties not to get regular airplay these days.

Alpert continued to play for many years, of course, and had no problem finding a record company.  You see, that little record company Alpert founded to market "The Lonely Bull" just kept going. Named after Alpert and his partner Jerry Moss, A&M Records was one of the most successful labels in the rock era.  And it all started with a fake Mariachi sound recorded in a garage.

*Alpert's voice was not a great one, and he really never planned on having the record released; it was something of a gift to his wife. But there was such a demand for it that the finally agreed.

**Most people today are familiar with his music through reruns of The Dating Game, which used Tijuana Brass music as its background music for the show.

10/8/11
RobGems.ca wrote:
Herb Alpert actually did some singing records for Dot & RCA Victor under the name of "Dore Alpert" with little-to-no success around 1961-64. The last notable Dore Alpert single was issued by A&M Records in 1964. It was titled "Dina", backed with "You're Doing it To Him what You're doing To me." None of these vocal singles charted or sold as well as his instrumental records with the Tijuana Brass, so he put off singing for nearly four years, until the release of "This Guy's In Love With You." Alpert had just signed friend & musician Burt Bacharach to the A&M label the year before(1967),and wanted to have hits with him. While Bacharach never had a Top 40 single on his own, his albums sold very well,and Bacharach's compositions were hits for other artists. Of special notice to Herb's long-out-of print singles as "Dore Alpert" was a 1962 single titled "Tell It To The Birds". It was issued as Alpert's first independent single on Carnival Records. Alpert then realized there was another record label named "Carnival" (a R&B/Soul Label located in Philedelphia, who's biggest artists were The Manhattans (of "Kiss & Say Goodbye" fame),so Alpert and his new partner Jerry Moss then changed the name of the label to A(lpert)&M(oss) Records, or just A&M for short. While "Tell It To The Birds" only sold locally, the 3rd single on the newley re-christened A&M label, "The Lonely Bull" took off to become a national smash. The rest was history for A&M Records.Also, a side note: "The Lonely Bull" was not the first instrumental hit to employ a "Mexi-American" sound. Alpert was also inspired by the 1961 Top 10 hit By Bob Moore (the famous Nashville bassist) titled "Mexico" (#6,Monument records, 1961.)Alpert was impressed by this song to do a cover of it on his "Lonely Bull" album.