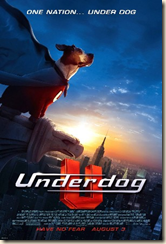 When I heard about this movie, I had the same reaction as a vampire does to garlic -- it made me want to stay far, far away.  What was the point of a live-action version of a crappy Saturday morning TV show?  I watched the original cartoon as a kid, but mostly for three reasons:  It was on; it was something to watch on Saturday mornings; and we only got two channels.  I hadn't much desire to revisit the show, and I figured the nostalgia value was worth nothing at the box office.  Plus I have a low tolerance for the dog-do jokes I expect to be the movie's stock in trade.

But a few months ago, the movie came up on a discussion board I frequent, and was spoken highly of people I respected.  So I rented it. And while it's certainly not a great film, it's fun and better than it has any right to be.*

The story is standard.  A dog (voice of Jason Lee) gets caught up in the schemes of mad scientist ("I prefer visionary") Simon Barsinister (Peter Dinklage) and gets super powers.  He escapes to the home of an ex-cop turned security guard Dan Unger (Jim Belushi) and his son Jack (Alex Neuberger).  The dog -- named "Shoeshine" because of his habit of likcing Dan's shoes -- slowly discovers super powers and the ability to talk.  Barsinister and his assistant Cad (Patrick Warburton) search for Shoeshine (who takes on the superhero identity of Underdog) to try to use him to take over the world.

Nothing new here, but it's all in the execution. The choice of Jason Lee as the voice was inspired.  He shows the same goofy charm that makes him so good in My Name is Earl. Indeed, it sometimes sounds like the movie could be named My Name is Dog.

Peter Dinklage is -- as is usually the case -- excellent at Barsinister.  He manages to take the part and hit the right level of hamminess without overdoing it.  And Patrick Warburton brought his usual Tick-inspired goofiness as a big, dumb lunk.

If you know the show, it's nice to see how they kept true to the spirit of the original.  In the cartoon, Underdog's identity was "Shoeshine Boy," his main enemy was Simon Bar Sinister, and he spoke in rhyming couplets.  All this was written into the script in such a way as to be a nod to the original even when things were changed (Shoeshine Boy to Shoeshine, for instance).  There was also an appearance of the second string nemesis in the cartoon, Riff Raff.

It's not that the script is great all around.  The backstory between Dan and Jack is cliched and perfunctory.  But Underdog works despite this, by creating the world and playing it straight, and by being willing to take its source material seriously.

It's primarily a kid's film, of course, but there's no reason not to sneak a look at it when the kids aren't around.

*I discussed this phenomenon with The Doberman Gang. (Another film about dogs -- maybe there's a pattern).

Posted by Chuck Rothman at 2:28 PM