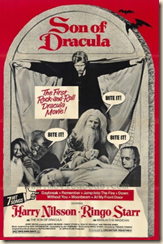 This is certainly an oddity, originally conceived as a rock version of the Dracula story. It fared poorly with the critics and audiences, but really wasn't all that bad, and in some ways was years ahead of its time.

The story tells about Count Down (Harry Nilsson), the title character, who is about to be crowned King of the Underworld by Merlin (Ringo Starr). But he falls in love with the human woman Amber (Suzanna Leigh), and decides to become mortal himself, leaving the honor to Dr. Frankenstein (Freddie Jones).

The story is used for a bunch of Nilsson's songs; the single "Daybreak," was written for the film and is the only original.

But what makes the film interesting is Nilsson's performance.  He plays the vampire as a moody longer longing for love. Now, that's a pretty common trope these days, but back in 1974, it was unusual.  The film is less a horror film than a romance and Nilsson's moody performance is quite good.

Ringo Starr is also good as Merlin.  Starr's strength as an actor is the absolute sincerity he brings to every line; when he says anything, it's with a seriousness that makes even the silly believable, and he is especially good here.

I have especially fond memories of it, since I saw it at the State Theater in Schenectady, one of two old movie palaces still standing. But whereas the other, Proctor's Theater, is a lively arts venue, the State hasn't held an event for thirty years.  It was a beautiful vast performance space (well, probably still it, though no doubt everything is falling apart by now) and the environment was impressive enough to make the film even more enjoyable.

But I'm one of the few.  Audiences stayed away, and even those involved have harsh words for the project.  Director Freddie Francis returned to his main trade, cinematography, and won a couple of Oscars in the process. Freddie Jones had has a long career in UK films, as has Dennis Price (best known as the lead in Kind Hearts and Coronets).

Ringo (who produced) has basically disowned the film, so there is no DVD or video, and it's had very few TV showings over the years.  But I think it would be worth seeing again.

Posted by Chuck Rothman at 9:36 PM