The obscurity of this film is quite surprising. It's recent, and it's another film by the gloriously strange mind of Charlie Kauffman. 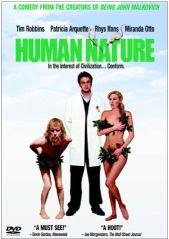 Kaufmann (sometimes with his twin Donald) wrote some of the strangest comedies of the past few years, starting with Being John Malkovich, Adaptation, and Eternal Sunshine of a Spotless Mind. Those films are talked about all the time in one aspect or another, but Human Nature is forgotten.

That's odd. Human Nature was filmed right after Being John Malkovich (though the script was written earlier), and you would have thought it would have caught people's eye. It certainly has a lot of Kauffman's weird mixture of slapstick and deep philosophy. But the film seemed to vanish.

The plot is typical Kauffman (if anything about him can be said to be typical). Lila Jute (Patricia Arquette) is a young woman who suffers from hyperpilosity -- hair all over her body. She runs off in the woods to be with nature, but, eventually sick of it, returns and starts an affair with Dr. Nathan Bronfman (Tim Robbins), a scientist who's trying to teach table manners to mice. Meanwhile, Puff (Rhys Ifans) is raised as an ape by a father who left humanity to live like an Apeman. Puff is captured and becomes Bronfman's experiment, a way of seeing if he can be taught to be civilized. Gabrielle (Miranda Otto) is Dr. Bronfman's lab assistant who has an agenda of her own.

The movie is very funny. It starts with the murder of Dr. Bronfman by Lila, with Puff -- now seemingly cultured and refined -- testifying before Congress about the importance of the human and animal sides of life.

Kaufmann is fond of twists, and this is no different. I won't go into the details, but one of the major themes of the film is that humans are by nature duplicitous. All the characters lie to one another in different ways and betrayal is a fact of life. The surprises are fun to follow -- all the way to the end.

Tim Robbins seems incapable of giving a bad performance, and Patricia Arquette brings a lot of interest to Lila. I discovered that I had seen Rhys Ifans before -- in the Australian comedy Danny Deckchair -- and he stands out as he is taught to be refined, but with his animal nature taking over all too often. It's also fun to see Mary Kay Place and Robert Forster as Bronfman's parents.

Posted by Chuck Rothman at 6:37 PM