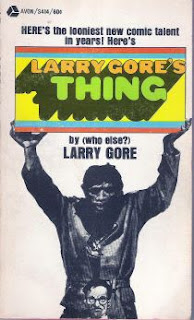 Who is Larry Gore? Well, he's described by Frank Jacobs as "two parts Groucho Marx, one part Machiavelli." William M. Gaines -- long time publisher of Mad Magazine, said Gore was "even madder than we are."

He made his living as a publicist and he did have some famous clients: Red Skelton, Mad Magazine, the Miss NYC Pageant, John Wayne. And his most famous publicity stunt became legend: Tiny Tim's marriage to Miss Vicky on The Tonight Show.

So what was Larry Gore's Thing? In theory, a newspaper comic strip, though it didn't look like one. There were no characters (other than Larry Gore). There often wasn't any art (other than maybe a stock photo). Often, it was printed sideways. It was filled with dumb jokes and pointless stories, fake ads, topical humor, celebrity quotes, and fake opinion columns that had no opinions. If anything, it was probably pitched as a comic strip version of Rowan and Martin's Laugh-in. Some items included:

Gore's only collaborator in this was artist Bob Clarke (best known for his work with Mad), who would add his own work to the clip art and photos.

The strip only ran a few years and in only a few newspapers (Newsday on Long Island being one of the few). Avon Books published a collection in 1970, but I don't think the comic lasted much beyond that. If you can find the book somewhere, pick it up.

*A play on "Bohack's," a Long Island supermarket chain that went out of business in the 70s.

Posted by Chuck Rothman at 8:37 PM

Good work in your comic strip blog, it's a nice one. I have a new comics directory site, please check comic strips directory. Complete lists of sites all about comic strip and more...

i actually SAVED a few Larry Gore's Things from Newsday. they may be yellowed and crinkled but definitely worth a view. i'll try to dig them up...

I'm Larry Gore's daughter, Tracy. That the internet was born after my father died (way too young) is the reason that so little about him is available on the web. Really appreciate your glowing post on my Dad but would like to add a couple of corrections.

The "Laugh In" writers closely followed LARRY GORE'S THING and his comic genius would often be copied verbatim by them in subsequent weeks. He was an original and would never stoop to copy. He wasn't inclined to be litigious which is why they got away with it.

He started the column at Newsday but ended up being syndicated in over 100 papers.

He was one of the top publicists in New York in the 50's and 60's and there wasn't a columnist that didn't love him and his items.

Thanks again for this remembrance.

Ditto to what my sister, Tracy, said. I'm lucky that we have all the strips (even some original artwork, and boards) as well as much of his other great stuff. I believe that Larry Gore's Thing was syndicated by Newsday to about 50 or so other papers in the US.
At the time of his death in London, I know he was in talks with John Cleese about doing a new show. It might have been Fawlty Towers but I'm not sure. I do know he loved the Monty Python crew.
Anyway, I believe you do link to the www.larrygoresthing.com website and thank you. I should put more material!
I only wish I had a fraction of his talent!

Big fan of Larry Gore's Thing - as a kid growing up I would mimic his comic and leave it out at night for my Dad to read (he worked nights)...In the morning , I would find his version of Larry's great comic - fresh jokes and all. What great memories..Miss 'Thing'..

are there any thoughts of putting The Thing together for publishing? I know i would love to have it in my library and Mad afficionado's of my age would line up for this holy grail of missing memorabilia.
i looked forward to his column each day , it was definitely a breath of fresh air.
When i publish many of my comic ideas in Kindle, its the spirit of the Mad geniuses i try to summon.

Vince, If you send me your contact info I would send you some tear sheets from LARRY GORE'S THING. So many of his columns would be timely today - just change the names of the politicians and pseudo celebrities. my email is nytracy@verizon.net

He did a few THING compilations in paperback and you'll see them for sale once in a while.

I am often contacted by fans of my father and his 'Thing'. My email has changed but if you'd like a copy of one of his columns, feel free to contact me at nytracy@verizon.net

Although i lived in queens at the time, home of the long island press, a few towns over from mr gore's family in woodmere, i first "found" larry gore's thing when i was in the navy and he was syndicated in in the norfolk virginian pilot. I pointed that out to him in a letter and he invited me over to his home where, as he said, he "have 3 kids, one of each". He casually asked 2 of them around for their opinion of his latest "thing", and he might have not been litigious, but was upset when smuckers asked him for ideas and said to combine their jelly with peanut butter, and after telling him it was physically impossible, somehow they managed to manufacture it. I would think it's sometimes tough to love eccentrics, but glad his children apparently loved their dad.

Was such a fan of Larry’s. Especially The Fellas. Brilliantly simple and funny

I was talking with my grandson yesterday about working for a man from Mad magazine and this morning woke up remembering his name like it was yesterday. Mr. Larry Gore had an office I believe around Lexington Avenue that is the stop I got off of from school when I was only around 15 I was the typist for his short articles. Did not realize at the time just how important he was being a teenage but did meet I believe Rocky Graziano or Marciano know he was a fighter in the office one day. I was working there around the time of Tiny Tim and Miss Vicki getting married but not sure of much else think I left around that time. I do remember going to his wife's office with some material I believe for their marriage. Little did I know than how much more I missed out in knowing more about him and all that he had accomplished. Sorry to have read his passing at such a young age that year I became a mom.