In 1975, Norman Lear was king of TV. He had several smash hit shows: All in the Family, Maude, Sandford and Son, The Jeffersons, and Good Times, all gaining notoriety by Lear's way of pushing the envelope of what was acceptable on TV. All shows dealt with subjects that had been deliberately ignored by TV: bigotry, racial issues, abortion, etc. So, in January 1975, Lear went for broke and pushed the envelope as far as it could go. The show was The Hot L Baltimore.

It had a pretty good pedigree -- the title came from an off-Broadway play by Lanford Wilson (whose cast included Judd Hirsch) that ran for over 1500 performances and won a Drama Critics Circle Award for Best American Play. Lear, of course, made massive changes, since the play was a slice-of-life drama and he needed to fix it up so it worked as a TV series.

The show was set in the rundown Hotel Baltimore (the title came because the "e" on the neon sign was blown out). Clifford Ainsley (Richard Masur) managed the hotel and tried to keep rein on its inhabitants, which included Bill the desk clerk (James Cromwell), in love with the prostitute April Green (Conchata Ferrell). Suzy Marta Rocket (Jeannie Linero) was another hooker, George and Gordon (Lee Bergere and Henry Calvert) were an older gay couple, and Mrs. Belotti (Charlotte Rae) would come to visit her weird son, Moose, whose exploits were described but never seen.

The subject matter raised fits. Hookers? Homosexuals? The protests were loud. ABC stood by the show and continued to let it run. 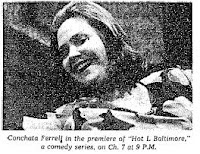 The show was somewhat different from other of Lear's comedies in tone, far less strident and more based on characters. I especially liked Conchata Ferrell as April, the center of the show. It was not only usual to have a hooker as a main character in a show, but Ferrell was (and still is) a large woman. Hookers on TV and most movies (especially back in the 70s) were usually attractive women, more fantasy than reality. And Ferrell is a terrific actress. She's currently on TV as Bertha the housekeeper in Two and a Half Men, a role that seems to expand to give her more screen time for her amazing comic timing, and was great in a dramatic role in the pioneer western Heartland.

Masur was also good as the put-upon Ainsley and later developed a career as a character actor in TV. The most successful person in the cast was Charlotte Rae, who became a TV icon in The Facts of Life (I saw her on stage a few years ago at Ford's Theater -- yes, that Ford's theater).

But the protests did hurt ratings, and the show was eventually canceled due to low ratings. Sometimes when you push the envelope, the envelope pushes back.

For some reason I always remembered this show. I especially remember Conchata Ferrell & Richard Masur. I was only 9 years old at the time, and the show seemed to run longer than just a season. Oh well. That's show biz.

I remember that show vividly. I was only 14 when it came on, and I was already into Norman Lear's outspoken sitcoms. I liked the entire cast, too, including Richard Masur (I used to love how he'd bumble into the hotel each week) and Conchata Farrell (who is now wasted on "Two and a Half Men").

cromwell did well going to all in the family as stretch, then to many movies.

Charlotte Rae had an unseen son upstairs that I kind of pictured to be like that hairy monster created by the little Martian in the Looney Tunes. She called him "junior" or something like that. He always wreaked havoc but was talked about but never seen.

Why on earth is this show not on DVD yet???

Maybe someone can contact Norman Lear's office in Los Angeles about re-releasing this show.

I remember this show that i made it a point to watch it every time it came on,that one line i still remember to this day cromwell asked conchata for a date she responded "you have to know how to ride a Honda before you handle a Harley what a great show slyone7426 3-5-12

I was fresh out of high school when this show came on and it was great. Far better than anything Lear did since All in the family. Conchata is terrific in everything and she was in this as well. This show was fresher, sharper and funnier than everything else on tv. Such a huge disappointment when it was cancelled.

I loved this show. Is it available on DVD or streaming anywhere?

This show was the best comedy ever. So sad ut was so short lived. Where does one get the dvd?

I loved this show. Conchita was brilliant as always. This needs to be released on DVD!!