The Man Who Could Work Miracles 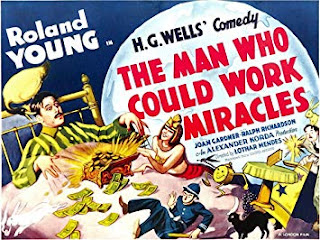 (1936)
Directed by Lothar Mendes, Alexander Korda (uncredited)
Written by H.G. Wells
Starring Roland Young, Ralph Richardson, Ernest Thesiger,
IMDB Entry
I’ve been poking around the Internet Archive, looking for movies to write about and came upon The Man Who Could Work Miracles. I’d seen parts of it over the years, but this was my chance to see the entire thing.

It starts out with a group of Celestial Beings who wonder if the human race would be better off if they could perform their own miracles. The pick George McWhirter Fotheringay (Roland Young), a clerk in a department store, as their first experiment. George discovers he can merely request something and have it come true. It starts out small, with candles and rabbits. George thinks it might be the basis for a magic act. But, as he learns more, he begins to think bigger.  The Vicar, Mr. Madig (Ernest Thesiger), thinks he should use it to help humanity, while Colonel Winstanley (Ralph Richardson) feels it will be a disaster.

It is based on a story by H.G. Wells, who is the only writer credited. The movie is filled with discussions of miracles and their pros and cons, reflecting Wells’s politics.

One scene that I remember well from when I first saw it was when George gets mad at a cop and tells him to “Go to Blazes!” The policeman finds himself in a very hot place, and starts to take notes.***

The movie’s special effects were top notch for their time, and somewhat innovative. There’s a lot of things appearing out of nowhere, of course, a trick that dates back to George Melies, but other scenes were state of the art for the time. There’s one where George tidies up the store that is particularly impressive.

Posted by Chuck Rothman at 6:25 PM

There is a referenc to it in Scorsese's Boxcar Bertha, where it is the movie showing in the local theater.