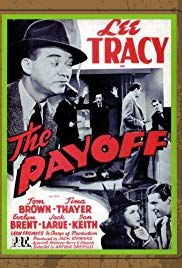 (1942)
Directed by Arthur Dreifuss
Written by Edward Dein (screenplay), Arthru Hoerl (story)
Starring Lee Tracy, Tom Brown, Tina Thayer, Evelyn Brent
IMDB Entry
Full Movie at the Internet Archive
Many people don’t understand what a B movie was in the days of the studio system. Since the studios owned the theaters, they were in constant need of product and a B movie was one with a lesser-known cast, cut to run in a shorter time to make for a double feature, often in small, neighborhood theaters whose audiences were all within walking distance.That didn’t mean they were necessarily bad, and there are always some nice little films in that classification.  The Pay Off fits into this category.

It starts out with the murder of a special prosecutor and one of the suspects has an airtight alibi: he was playing poker at the home of wisecracking reporter Brad McKay (Lee Tracy). McKay goes on the case and discovers Tina Thayer (Phyllis Walker) may have an important clue. Aided by Guy Norris (Tom Brown) and distracted by femme fatale Alma Dorn (Evelyn Brent), McKay slowly ferrets out the mystery.

The role fits Lee Tracy like a glove. He made a career of playing wisecracking reporters, both on screen and on Broadway.* He definitely takes center stage and it’s surprising that his career didn’t make more of a splash, other than perhaps because the stereotype grew old after WWII.

Like most movies of this type, the plot moves along briskly with a few twists here and there.