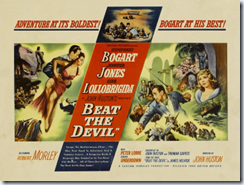 Deadpan comedy is difficult and it’s easy for the audience to miss the point.  When you see Humphrey Bogart and Peter Lorre is a synopsis with hints of The Maltese Falcon and Casablanca, you might think of a thriller, but instead you have Beat the Devil.

The movie showed Billy Dannreuther (Humphrey Bogart), a down-on-his-luck American and his wife Maria (Gina Lollobrigida), who are mixed up with four ne’er-do-wells: Peterson (Robert Moreley), “O’Hara” (Peter Lorre), Ravello (Marco Tulli), and Major Ross (Ivor Barnard). Billy befriends Gwendolen Chelm (Jennifer Jones) who is traveling with her husband Harry (Edward Underdown). The group is waiting in Italy for their ship to finally set sail so they can travel to British East Africa as part of a scheme to buy land rich in uranium. 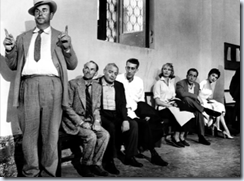 The plot doesn’t matter as much as the characters. They are all vivid personalities, with Billy – played like a less romantic version of Rick from Casablanca – (almost) always on top of the situation.  Peterson is the brains of the organization, while “O’Hara” (who is obviously using an alias) is scheming. Major Ross is a psychopath.

The other characters also stand out. Gwendolen is an inveterate liar, her husband a silly-ass Englishman.

The movie is carried by the dialog. This was originally a straight filming of Claud Cockburn’s novel, but during shooting, director Huston hired Truman Capote to punch up the dialog. Writing a day or two ahead of filming each scene, Capote added wit and more character quirks than you could shake a stick at.

The movie failed at the box office, and Bogart hated it, probably because he lost a lot of money on it. But it’s an odd bit of film history that’s fun to watch.

Posted by Chuck Rothman at 8:31 PM

I understand Bogie hated this movie--he had his own money in it, and it tanked at the box office. I love it--Jennifer Jones as a blonde (who prefaces each outrageous lie with the phrase "in point of fact...")! Rita Hayworth doesn't appear, but she's practically an additional character. My favorite line (delivered by Lorre): "Many fine people in Chile are called O'Hara").