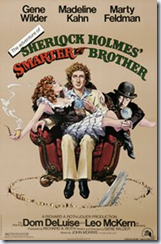 (1975)
Written by Gene Wilder
Directed by Gene Wilder
Starring Gene Wilder, Madeline Kahn, Marty Feldman, Dom DeLuise, Leo McKern, Roy Kinnear
IMDB Entry
It’s the cliché that the dream of every actor to be a director. Oddly, the cliché doesn’t include becoming a writer, probably because writers are not valued in Hollywood.  Gene Wilder managed to make the trifecta of actor, writer, and direction in one film, the pastiche The Adventures of Sherlock Holmes’ Smarter Brother.*
After an important document is stolen, Holmes and Watson have to leave the country for awhile, so he’s giving the case to his younger (intensely envious) brother Sigerson (Wilder). Holmes sends information on the case using Orville Sacker (Marty Feldman), a man with photographic memory. Meanwhile Moriarty (Leo McKern) is out to get the document, with the help of his assistant Finney (Roy Kinnear). Just after Sacker arrives, Jenny Hill (Madeline Kahn), a music hall singer and inveterate liar.
Wilder always was a great comic actor, a master of the slow reaction.**  His Siggy is impulsive and often wrong, sure of himself until Sacker points out, almost as an aside, where he was wrong.  His is motivated by his jealousy of Sherlock, who he thinks is overrated.
Feldman was also in fine form, and Madeline Kahn is, as usual, a delight. There’s a nod to her Broadway roots as she’s given a chance to sing.And Leo “Rumpole” McKern is a master of chewing scenery.
Ultimately, the movie is mildly funny, more in concept than in execution.  A more experienced director might have gotten more out of the script.***   Still, there’s enough here to make it entertaining, if not classic.
___________________________________________________________
*He had already cowrote one film with Mel Brooks:  the classic Young Frankenstein
**One of his best bits was in Woody Allen’s Everything You Always Wanted to Know About Sex (But Were Afraid to Ask), where he had to show he was falling in love with a sheep. He made it both believable and very funny.
***Wilder had originally asked Brooks to direct, but Mel didn’t want to direct any script that wasn’t his own.
Posted by Chuck Rothman at 8:07 PM

By "Bernadette Peters," do you perhaps mean "Madeline Kahn"?

My mistake. I've corrected it.