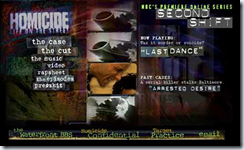 TV is still figuring out how to deal with the Internet, and it was far worse in the early days of the web. One of the most interesting examples was by the TV show Homicide: Life on the Street.  Already one of the best shows of its era, the producers decided that the way to go was to integrate it into the web.  The result was Homicide:  Second Shift.

A web page was set up, covering the solution of a mystery by the “second shift” of the Baltimore cops featured in the show.  Now this was before home broadband was financially feasible, so the result was a web page outlining a crime, where you would click to see evidence and clues, as well as the cops involved.  “Scenes” were created by graphics surrounded by dialog.

The website design was excellent, very advanced for the time.  Even today, it doesn’t look dated.

The crime on the net was connected to the TV show. In one episode of the show, for instance, a cop we’ve never seen before calls one of the regulars aside to discuss the case.  In another case, the online version showed events that happened both before and after what was on the air.

Actors, most notably Allison Janney, were cast to play the roles, usually to be photographed for the web page.  A few of the TV cast also were used.

The experiment was a critical success, but not very popular.  The pages were really only just text and graphics (though excellent design) and there was no interactivity.  For most fans of the show, it was a curiosity. As I suppose it is today.