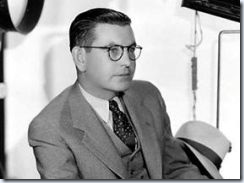 I never got into The X-Files.* But when I was looking at an episode list, I noticed one titled “Clyde Bruckman’s Final Repose,” which some people consider one of its best.  But the name of Clyde Bruckman rang a bell, as someone who worked with most of the great names of early film comedy.

Bruckman was born in San Bernadino, California and began his writing life as a sportswriter for the San Bernadino Sun.  He made a name for himself as a sportswriter who eventually tried a hand at fiction.  In 1919, he was hired to write intertitles at Universal.** He came to the attention of Buster Keaton, who hired him to be a gagwriter*** for his first feature film, Three Ages.

But, as the cliché goes, he wanted to direct.  After one short subject, Cowboys Cry for It, he was given the chance to share directing credit with Keaton on one of the greatest of all silent comedies:  The General.

There is some question as to how much directing he had done, an issue that often came up during his directing career.  Keaton had directed several of his own features, though often with a co-director.  It’s likely that Keaton worked as the director of actors, while his co-director dealt with the things he couldn’t do while performing.  But, in any case, it was the start of Bruckman’s career behind the lens.

He continued directing comedy short subjects.  Two years later, he added Putting Pants on Philip to his resume, a landmark film that first had Laurel and Hardy together as a team.****  He did several other Laurel and Hardy films, as well as films starring Harold Lloyd, starting with Welcome Danger, Lloyd’s first talkie.

Bruckman’s career faltered with the coming of sound.  But it didn’t stop him from a few more notable films as he hooked up with W.C. Fields.  The Fatal Glass of Beer with Fields is one of the funniest short subjects ever made.***** His last directing job was on Fields’ classic The Man on the Flying Trapeze.

His problems getting work was due to his alcoholism.  That wasn’t necessarily a deal killer in Hollywood, but Bruckman went beyond their patience when he vanished during the production of The Man on the Flying Trapeze, with Fields (uncredited) going behind the camera to stay on budget.

Bruckman went back to writing.  He wrote the story for several Three Stooges shorts (including You Nazty Spy!, one of their best) as well as working on films for Andy Clyde an other lesser-known comedians of the era.

But trouble struck in the 40s.  His old employer Harold Lloyd sued the studio for plagiarism after Bruckman reused some gags he had written for Lloyd films.  It was ultimately a ridiculous lawsuit – some of the gags in question predated Lloyd’s use, and Bruckman had written them in the first place – but Lloyd won the suit.

Bruckman was broken. The studio fired him and he ceased to make an effort.  Buster Keaton, who never let an old friend down, hired him to write an episode of his TV show, and he got a job writing for Abbott and Costello’s show.  But once again he started recycling gags and Harold Lloyd sued again, putting an end to his career.

And, ultimately, his life.  Borrowing a gun from Buster Keaton, Bruckman committed suicide on January 4, 1955.

It was a sad ending to a funny man.  Bruckman certainly had talent before the bottle took it away, and considering he worked with most of the names we still recognize as comic icons, he couldn’t be all that bad.  Most likely, his best work was codirected (or entirely directed) by the comic geniuses he worked with,****** but there had to be a reason why they were willing to work with him.  Maybe he was a nice guy; maybe they took pity on his drinking problem, but, one way or another, he had a career most people would envy.

**The title cards shown during the movie.

****They had been in movies together, but didn’t work as a team before this.  Laurel knew Bruckman from Cowboys Go For It, in which he appeared.

*****Though it was far more Fields’s film.  Fields had shot a version, but the studio hired Bruckman to add shots that Fields didn’t want to do.

******Several of his films had a second, uncredited director, too.  I would assume that they took over when Bruckman was too drunk to function.

Posted by Chuck Rothman at 1:58 PM

From what I've read Harold Lloyd had paid Bruckman for those gags therefore, he owned them. It was a sad ending for Clyde Bruckman.