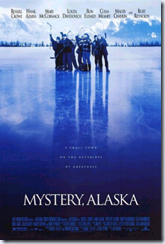 In the 1990s, David E. Kelley was riding high.  He produced (and wrote) several successful TV shows, including Emmy winner Picket Fences, Ally McBeal, and The Practice. In his spare time, he wrote screenplays for films, using his penchant for quirky characters and situations.  Mystery, Alaska was one of his best.

The name refers to a small town filled (like most of Kelley’s work) with eccentric characters.  Town life revolves around the “Saturday Game,” played on a frozen pond.  John Biebe (Russell Crowe) is the town sheriff, reaching the age when he’s having trouble keeping up with the youngsters.  Among the small stories of characters, there is some big news:  a reporter from Sports Illustrated hears about the game and writes up an article about it.  Suddenly, Mystery is on the map, and the townspeople are all affected by it.   And things get more frenzied when the New York Rangers show up in town to play an exhibition.

The sporting element is a small part of the film.  Most of it involves the characters, their loves, and their dreams.  Burt Reynolds is good as the town judge who has problems with the the hockey craziness, while Colm Meany* is the mayor who sees this as a way to promote the town.

One thing I really like about the film is the ending, which is a logical anti-cliche that has a strong emotional kick.

The movie did not do well.  The fact that it was subverting the tropes of a sports film probably didn’t help; it’s safe to saw there are few sports films like this.  But I found it an excellent entertainment.