I Love You Again 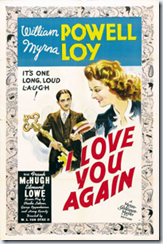 One of the most tired of all sitcom tropes is amnesia – someone gets hit over the head and loses all memory.  It’s a sure-fire plot device if you don’t mind the clichés – the person doesn’t recognize friends, and his friends get into a comic tizzy trying to set things straight.  It’s usually the sign of a poor writing staff. I Love You Again takes this an, by turning it on its head, comes up with a very good movie.

On a cruise ship, Larry Wilson (William Powell), a stick-in-the-mud businessman gets hit on the head.  He quickly realizes that he’s really George Cary, a con man and has been thinking he was Larry for the past nine years.  With the help of an buddy from the old days, Doc Ryan (Frank McHugh), he returns to his wife Kay (Myrna Loy), who is in the middle of divorcing him.  And when he learns that his marriage to Kay has made him an important member of the community, he goes to use his position to swindle them all.  But there’s a complication:  he falls in love with her, and she has no desire to return to her boring husband.

There’s no need to point out the chemistry between Powell and Loy; the two had been together for nine films at this point (including some of the Thin Man series) and were practiced in playing off one another.  In this case, the relationship is a bit more fraught that usual, as Kay is sick and tired of Larry and doesn’t want to go back to him.

And, of course, Frank McHugh is always a delight.

The direction is vintage Woody Van Dyke.  He was a very successful director of the 30s, know for his breezy style and fast-paced dialog.  However, since he didn’t work on “prestige” films and concentrated on more lowbrow work, he was underrated by critics.

Though a success, the movie was overshadowed by the Thin Man films and didn’t get the notice at time went on.  But it’s a real gem of its day.

Posted by Chuck Rothman at 7:40 PM

Watched this today...really good film...but overshadowed by the TM series and their other films... which is why I'd never managed to catch this before!